Just having a little look at the blog and realised I missed the 1st anniversary of Neil Cooks Grigson! What a complete pillock!! Looking back, the 1st entry was written on September 11th; how could I forget that.

That said, I’m very pleased that I’ve managed to keep it up this long. I’m still very eager to keep ploughing through them and very happy that so many people seem to be looking at the blog – whod’ve thunk it!? I’m glad I was talked into it. So cheers to everyone who’s taken part, cheers for reading and cheers to everyone who has commented thus far. Year 2 will be better, I feel!

All I need to do is get off my lilly-white ass and get cooking somthing; maybe I’ll do something tonight..?

Well, well, well, it HAS been a while hasn’t it!? I cannot apologise enough readers, but I have had what can only be described as ‘personal problems’ of late and therefore not been blogging, or indeed cooking. Neil Cooks Grigson is not the place to talk about them however, sufficed to stay I shall be doing many more meals for one…

Anyway, in order to do some of the more interesting and challenging dishes in the book, I have decided on a new venture: The Grigson Kitchen. The idea being I make a nice two or three course meal for a few friends at least once a month and we all go Dutch on the bill. What do we think readers? A good idea? I’m going to start with Lee, Evelyn and her chap Ed. Evelyn is, however, extremely picky about her food, but had kindly picked out several recipes she likes the sound of. I think I am going to start off by doing some salt beef from scratch – I managed to find a seller of saltpetre on ebay which is probably cut with rat poison or something, but we’ll see. It does, however, take a month to pickle/brine/cure/whatever the right adjective is, so I need to do something else in the mean time.

One of the meals, I think, should be offal-based. So if you are in Manchester and fancy a meal that is slightly bizarre drop me a message; I’m hardly going to roast marrow bones for myself now am I?

I was “working from home” the other day and therefore needed to procrastinate heavily; been making a poster for the Faculty of Life Science Research Symposium and though there’d be fewer distractions at home where there’s the internet, telly and the kitchen. I thought I’d have another stab at bread recipe and the last one was very nice, but I rushed it rather. Then I remembered Doris Grant’s Loaf – I had bought some stone-ground wholemeal flour specifically for the recipe, but had totally forgotten about it. I’m trying to get fit at the moment and so trying to cut down on white carbs, so this one was right up my street, plus Griggers says that as long as you can read and measure you can make this bread as it requires no kneading. I’m not too sure about that, but it is easy and certainly a welcome change.

Add 1 ½ level tablespoons of dried yeast to 1 ½ rounded teaspoons of dark Barbados sugar (you can use honey, but I like burnt liquorice taste you get off molasses) and whisk in 1 ½ tablespoons of blood-heat water in a small bowl. Leave yeast to active and foam, which takes 20-30 minutes. I found that placing the bowl in a larger one filled with warm water sped the whole process up. While that’s happening weight out 1 ½ pounds of stone-ground wholemeal flour into a large bowl and mix in a teaspoon of salt. If (like me) you don’t have somewhere warm like an airing-cupboard, but the flour in an over at the lowest temperature possible and let it warm through. When the yeast is ready, make a well in the flour and pour in the frothy mixture and slowly pour in one pint of blood-heat water, mixing thoroughly with your hands (no need for mixers, here!). The dough should be quite sticky, though you may find you don’t need all the water. Split the mixture between a large and a small loaf tin that have been greased and allow the dough to rise for about 45 minutes (I put it back in the still-warm oven). Bake for 40 minutes at 200°C.

FYI: Doris Grant was a very popular post-war cook and suggested this recipe as an alternative to the ‘national loaf’, which I can imagine flaccid and tasteless (though probably no way near as bad as our standard supermarket loaves these days).

#78 Doris Grant’s Loaf – 8/10. On my first slice, I thought I’d messed it up as it is not a light fluffy loaf, but quite heavy and mealy like soda bread. After another slice, I was hooked, and managed to eat most it to myself! Griggers suggests slicing it thinly with smoked salmon, but I’m not really a fan, so I had butter, farmhouse Cheddar and chilli jam. Go out and make this!!

Semolina pudding is probably what most people think of when looking back at the school dinners they detested. I don’t know why people hate it so much – I love it. I almost lived off it as an undergraduate. Griggers herself detested it. It’s all very odd. Anyway, I needed a cheap pudding to go with the cheap dinner – all I had to buy was semolina and milk, everything else I had in. Scanning the recipe, I realise why Griggers liked her recipe; it’s nothing like a normal semolina pudding at all! It is for this reason that you should try it. If you normally hate it, you’ll like this version; it’s more like a soufflé. Weird.

Start by measuring out 1 ½ pints of milk, and use a little of it to mix into 2 ounces of semolina so that a paste is formed. Bring the rest of the milk, 2 tablespoons of sugar and a split vanilla pod slowly to the boil. When boiling, tip in the milk and whisk vigorously to avoid any lumps and return to the pan to simmer gently for 10 minutes. Take it off the heat and stir in two egg yolks and then fold in two stiffly beaten egg whites. Pour the whole lot into a buttered ovenproof dish (leave the vanilla pod in) and bake at 190°C for 15-20 minutes until the pudding has set and it had gone brown on top. 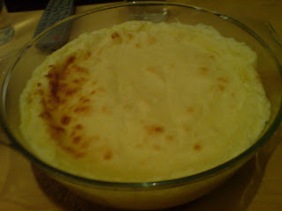 FYI: Semolina means ‘part-milled’ in Italian as it is produced from the partly ground Durum wheat the Italians use to make pasta.

#77 Baked Semolina Pudding – 5.5/10. I liked the dessert; an odd mix of traditional semolina pud and, as I said, a soufflé. The only problem I had with it, is that it wasn’t sweet enough – 2 tablespoons ain’t enough, Sister. I think I would add an extra tablespoon of sugar and sprinkle some on top too for good measure.

If you are on a budget, this dish is certainly for you – it contains, basically, onions, potatoes, butter, salt and pepper. There are variations on the dish that include other ingredients, but essentially that’s it. Don’t be put off by it, it’s very tasty indeed and hearty too if you serve it with bread or roast meat. Greg and Joff were coming round so I thought it was a fine reason to do some recipes. This one is very much like the Pan Aggie/Haggerty that I made ages ago. I’ll give the version I did, but supply you with the additional bits and bobs you can add.

Start off by slicing 2 pounds of peeled potatoes with a food processor or mandolin. Put the slices in a bowl of cold water to rinse the starchiness away and dry them on a clean tea-towel. Next, slice a pound of onions into thin rings, do this by hand though as they cook quicker than potatoes and don’t need to be super-thin. Grease and line a baking dish with foil (if you want to turn out the ‘cake’ at the end), and start layering the potato followed by the onions. Season and add small pats of butter between each layer, repeat as many times as possible, but make sure you finish with a layer of potato; all-in-all aim to use 3 to 4 ounces of butter. Then, melt a final ounce of butter and pour it over. This is the basic dish, but I added a small (150ml) pot of cream and six tablespoons of water to it so that it was a sort of potato Dauphiniose. Cover with another layer of foil and bake for 1 ½ hours at 180°C, removing the foil in the last half hour, so the potatoes crisp up. Turn out onto a large serving dish if you like, and serve with bread.

You could add a quarter of a pint of beef stock instead of cream. Pickles go very well with it if you are not using cream in the dish. You could even place a small joint of lamb on top of the vegetables – though add only a little stock and use only the melted butter. Skim off any excess fat before serving it up.

#76 Teisen Nionod (Welsh Onion Cake) – 8/10. This is definitely one the best dishes so far. It’s easy and cheap and delicious. There are many variation of this dish it seems – Tyneside, Wales and Yorkshire all have their variation on essentially the same recipe – and each time I cook them I’m always surprise how tasty they are. Go and cook it – plus, with the credit crunch and all, you’ll be doing your bank balance a favour!

Now that it is late summer many English orchard fruits are at their best. This recipe uses pears, and it’s very important to use good ripe ones; if you do buy those rock hard types that can be used as blunt weapons, just let them ripen on a sunny windowsill. I don’t really eat that many pears, and certainly don’t cook with them often; I’m not sure why because I really like their sweet aromatic flavour. If you are like me and haven’t cooked with pears, then start with this one as it’s very simple yet effective – basically pears and Stilton cheese on toast. Why it is called Lockets Savoury I have no idea.

This recipe is for one person, so just multiply up depending on how many you need:

Start by toasting two slices of white bread and cutting off the crusts. Place the toast in a baking dish. Rinse some water cress and place it over the toast in a good layer. Peel, core and thinly sliced a pear (I used Comice) and place the slices on top of the watercress – no need to be neat! Finally thinly slice 2 ounces of Stilton cheese and place it evenly over the slices. Bake for 10 minutes at 175°C, and grate plenty of black pepper on top before serving.

#75 Lockets Savoury – 6.5/10. A delicious and quick dinner or tea. Warming the pars makes them even more aromatic and sweet than usual, which contrasts beautifully with the Stilton, plus the toast and watercress remain intact and don’t go soggy. However, I wonder how much better it is than just some pears, Stilton, salad and some good biscuits. There’s not much in it I reckon.