Skip to content
The move back to Houston after almost a month back in England has left me very homesick indeed and definitely in need of some therapy of some kind, especially when Sunday came around. Personally, I find nothing more therapeutic that having a good baking session. Unfortunately, I could not arsed to leave my flat and buy ingredients.  The Teatime chapter of the book has received the most attention out of all the chapters, and I assumed that all the remaining recipes required either ingredients or equipment that I have not yet acquired.  Not so, these little savory biscuits; they are made up of just plain flour, butter, milk and a pinch of salt.
I’d not heard of these before, but they are supposed to be served with butter and cream cheese and that sort of thing. I don’t like to quote big chunks of Jane Grigson’s writings on the blog, but I think this post requires it – her little introduction to this recipe is so evocative that I can’t resist. Enjoy:
“We once looked down on the perfect Greek cross of Mereworth Castle through young beech leaves, not long after we had visited the Villa Capra at Vicenza, which stands right up on a dusty hill surrounded by long grass. And here in the spring countryside of Kent was this perfect replica, with the same collected elegance, far below the valley. I should like to see the kitchens of Mereworth, where these biscuits were made in the nineteenth century.”
God, she is good. It’s a shame she is no longer with us. She goes on to tells us that the recipe comes from a book called Choice Recipes by a certain Lady Sarah Lindsay.

Mereworth Castle
This recipe make quite a large number of biscuits, I imagine that the dough will freeze perfectly well like most biscuit doughs do. It’s also a very easy dough to make, so if you’ve never baked before, this could be a good initiation!
Begin by rubbing one ounce of butter into eight ounces of plain flour along with a pinch of salt. Make a well and add some hot milk, bring the dough together adding more hot milk until it becomes firm but soft. Give it a knead. There’s quite a lot of lee-way here, unlike pastry, the hot milk and kneading is supposed to make the dough stretchy and it can take quite a bit of liquid. If it is a little too wet, sprinkle with some more flour. The dough can now be rolled out extremely thinly – make it as thin as possible, so thin you can see the work surface beneath. Cut out two inch circles with a plain biscuit cutter and bake for no more than five minutes at 220°C (450°F) until slightly golden. Some will produce giant bubbles others will not, but they will look beautifully home-made! Keep somewhere airtight as they do go soft very easily. 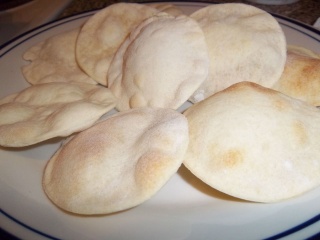 #270 Mereworth Biscuits. These were quite nice and went well with whatever bit and bobs I found in the fridge to eat with them. I do like cheese and biscuits but rarely ever think to buy them, apart from at Christmastime. These were good, but there are more English savory bikkies that I personally think are better, so I’m going to give them a safe 5/10.
I made this syllabub to end to the little meal Hugh and I cooked for Maartin and Ninja. I’d had a feeling no one had tried one before as they have gone out of fashion rather. I’d only had one in my life before.
Syllabubs were very popular up until recently. Originally they were simply a mixture of ales or cider mixed with milk or cream, which was probably like a boozy curds-and-whey. The more solid, whipped and ever-lasting syllabubs first appeared in the seventeenth century, according to Griggers, although both were kinds were obviously eaten because recipes for both appear in the Experienced English Housekeeper by Elizabeth Raffauld from 1769 (I have recently got hold of a copy of it).
The recipe in English Food, is from a pamphlet called Syllabubs and Fruit Fools, written by the great Elizabeth David, but I thought I’d give this one from Elizabeth Raffauld too, you know, for those of you who want to keep it real. And have your own cow….
“To make a Syllabub under the cow
Put a bottle of strong beer and a pint of cider into a punch bowl, grate in a small nutmeg and sweeten it to your taste. Then milk as much milk from the cow as will make a strong froth and the ale look clear. Let it stand an hour, then strew over it a few currants well washed, picked, and plumped before the fire. Then send it to the table.”
Brilliant. Sounds awful.
Anyway, here the recipe from Ms David:
This serves four to six. Bear in mind that you have to start this one the day before you want to serve it.
To a small bowl, add 4 fluid ounces of white wine or sherry (I went with wine, as sherry seemed a bit too rich), 2 tablespoons of brandy and the pared rind and juice of a lemon. Cover the bowl and let the flavours infuse together overnight. Strain everything into a large bowl and dissolve into the liquor two ounces of caster sugar. Next slowly mix in half a pint of double cream and grate in some nutmeg. Whisk the syllabub until it almost reaches the stiff peak stage so it is still a little floppy. Don’t over-whip it. There’s nothing worse than over-whipped cream; it goes all weird and cloying. You have been warned. Spoon onto glasses or ramekins and cover with foil or cling film. Leave them somewhere cool. Sir Kenelm Digby in 1669 recommends ‘[a] tiny sprig of rosemary or a little twist of lemon peel’, so I pared some thin pieces of lemon peel and let those stand in sugar overnight too as a traditional garnish. I served them with those little caramelised biscuits you get with coffee, I forget their name. 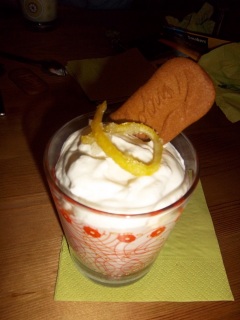 #269 Elizabeth David’s Everlasting Syllabub. Quite a boozy affair, this dessert, and I have never really got used to alcoholic puds, we just do eat them these days. However, as far as those kinds of desserts go, this was a good one, and nothing like the awfulness that was the Whim-Wham. The lemon and the fact it was a whipped dessert made it feel lighter than it was. Hugh ended up scoffing loads of them and made himself sick. Oh dear. I can’t scoff, cos I did exactly the same with the Whim-Wham. 6/10.
Hugh and I invited our mates Maartin and Ninja around for some food so I thought it would be the perfect excuse to do a couple of Grigsons. Poor things. For a starter Hugh made some mackerel pate (I should get the recipe from him and put it on here) and I did these potted shrimps. I wanted to cook a recipe that I couldn’t do in America and this is one. I so far haven’t found anywhere in Texas that sells brown shrimp.
For those of you that don’t know, potted shrimps are a Lancastrian delicacy – they are going out of favour as many traditional foods are these days and, as far as I know, the only place that makes them is a small fishery in Morcambe Bay. They used to be very popular across the whole of the country after Young’s opened a shop selling them in London. The shrimps are fished and boiled on the boat before being dunked in the sea to cool off quickly. As the boat returned to land with its catch, the women and children of the town would be waiting to pot the shrimps.  If you happen upon some brown shrimps, try making them yourself because they are pretty easy to do.
For every pint of shelled shrimps you will need to melt 4 ounces of melted Danish butter along with ¼ teaspoon of powdered mace, a pinch of Cayenne pepper and a grating of nutmeg. Once melted, mix in the shrimps and let them heat through. Pack into pots and cover with clarified butter and then some foil or cling film. Allow to set. Serve spread on brown bread or toast. Piece of piss.

#268 Potted Shrimps. I loved these. The shrimps are sweet and well-flavored and the traditional spices such as mace really complimented them. It’s a shame that mace isn’t used more often these days as it goes so well with fish. 7.5/10.

Hello there. I’ve been away from the blogosphere, or whatever they bloody call it for 4 weeks. I’ve had a lovely trip back to the good-old North of England, where I have managed to put on 9 pounds of weight, see my friends and family and spend some lovely time with Hugh. Oh, I’ve single-handedly pushed back the boundaries of science. I somehow managed to squeeze a few Grigsons whilst I was there and I shall be updating thee over the next few days.

Most of the recipes were ones I had done before – it is great that so many have become part of
my repertoire. Christmas dinner with the family was a meat-overload, doing Roast Turkey, Boned Rolled Sirloin AND Roast Pheasant. This is the first year since I started the blog that I haven’t done the Christmas Cake. I missed it. Next year, I shall!

Anyways, I’m back in Houston now and have made the resolution that I shall do my very best to keep blogging regularly – it’s been up and down since the move. My SMART target is to do one a week now I am back. That’s an achievable target, innit?