Skip to content
Clarrisa Dickson-Wright was on the telly yesterday as part of the BBC2 series The Great British Food Revival where various chefs and food writers highlight British foods that have fallen out of favour and are in danger of falling completely out of use. Needless to say, I approve. Ms Dickson-Wright’s food of choice was the humble rabbit.
Why has it fallen out of favour? There are two main reasons really – there’s the ‘Fluffy Bunny Brigade’ as Clarissa calls them that couldn’t possibly eat something fluffy and cute. This opinion is fine if you are vegetarian or vegan. Otherwise it’s a great double-standard. Another reason is the association with myxomatosis virus – a deadly bug that killed off 99% of them. It’s under control now, but mud sticks.
I think there are other reasons too: rabbit is thought of as poor people’s food, and people also have a problem with eating wild animals. Well the bottom line is that rabbits are a huge pest (they are not indigenous to the UK) and need to be controlled. In fact they are one of only two official game species, along with wood pigeon, that do not have a hunting season. We are over-run and they must be killed in order to manage the countryside efficiently.
It is for this reason that they are relatively cheap, and because they are wild they are truly organic and free-range and low fat too.
I coincidently cooked a rabbit recipe from English Food the other day. It’s less of a recipe and more of a suggestion really with very sparse instruction. Here’s the full entry:
Wild Rabbit
roast: 1 hour, mark 6, 200⁰C (400⁰F)
inside: herb stuffing
serve with: see hare [redcurrant jelly, port wine sauces…]
stewed: see [Stewed Hare, Rabbit, Woodpigeons or Venison with Forcemeat Balls]
Here’s what I did to roast the rabbit:

First up is to prepare your rabbit – you should find inside the kidneys, liver, heart and lungs. Remove those. If you like you can chop the liver and use in the stuffing. Instead, I made a little offal kebab from the heart, kidneys and liver. Then I larded the rabbit’s legs, loins and saddle with some thin slices of back fat. You can buy a special larding needle for this job but I used a skewer (it was a bit of a nightmare so I have bought myself a needle for next time). I then seasoned it inside and out and loosely stuffed it with the herb stuffing (see herefor the entry for that) before placing it in a roasting tin with a jacket of back fat. You could use streaky bacon if you’d prefer.

Then it was straight into the preheated oven for an hour.
I had some stuffing left over so I rolled that into small balls and wrapped them in some smoked bacon. I popped those in for the final half hour until brown and crisp.
When the hour was up, I took the rabbit out of the oven and let it rest on a serving plate and covered it with foil. I then got to work on making some gravy. I put the roasting tin on the heat and deglazed it with a splash of red wine and then some chicken stock and a tablespoon of redcurrant jelly. After it reduced and started to thicken, I took it off the heat and whisked in a couple of knobs of butter to thicken it further and give the sauce a nice shine.

Hey-presto! A roast rabbit!
#359 Rabbit. Well I enjoyed preparing this one and it did look like something from a medieval feast when it was finished. The flavour was good, though it was on the dry side; my rabbit was a young one I think and perhaps could have done with 45 minutes. Nevertheless, a tasty and fun meal to eat, though not quite as good as the rabbit pie. It did make delicious soup the next day though! 6.5/10.
The thought of eating fish paste may make people shudder, people would think differently if this recipe were named smoked fish pâté, I feel. However we are not French so fish paste it remains. Perhaps people think back to those nasty cheap homogenised pots of meat and fish paste from their childhood. If you make your own it is a very different creature and I am sure this one will be same.
The other thing that may put one off from this recipe is the name of the fish in question – the bloater. It’s not the most delicious sounding fish is it? There have been several bloater recipes and this is the final one, but if you are not in the know a bloater is in fact a cured herring. The cure is very similar to that of the kipper and the only real difference is that bloaters are cured completely whole giving them a more gamy flavour than a kipper. Because they are intact they bloat as they smoke, hence the name.

This is a nice straight-forward easy affair. Start by gutting your bloaters, removing any membranes from the cavity. I had just one, but was lucky to find two nice fat roes inside within so I reserved those and tossed the rest of the innards in the bin.
Pour boiling water over your fish and roes; the skin will curl and the body of the fish will noticeably tense and plump up. Leave for around 10 minutes to poach in the water. Remove the skin and flake the flesh, being careful to pick out any bones, don’t worry too much about the very thin hair bones, they will not be noticed.

Don’t forget to fish out the roes, should you have any. Weigh the fish and place in a food processor along with its equal weight in softened butter. Whizz up until you have a spreadable consistency you like. Season with ground black pepper, lemon juice and a little salt. Serve with hot toast.

You get quite a lot of paste – I got two 250 ml pots from just the one bloater. Not bad at all I reckon.
#358 Bloater Paste. This was delicious and light – the butter helped whip the bloater into a wonderful consistency and the lemon juice really accentuated the fish’s own natural piquancy. Very good. 7.5/10. 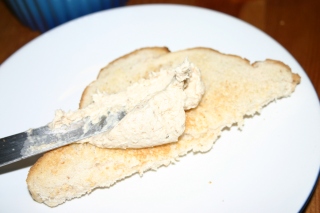 I have had the foraging bug of late so I thought I would try and make these fritters that appear to been lost to history. According to Jane Grigson, the 18th century writer Hannah Glasse gave a recipe for these fritters that use the plant comfrey. Oddly, I couldn’t find the original recipe anywhere – I found clary fritters and a recipe using comfrey roots – hey ho.

Comfrey is a relatively common plant found in ditches or beside hedgerows and river banks all over Europe. There are several species, but the most common in Britain is common comfrey with the Latin name Symphytum officinale, in case you want to find it in a field guide. They are quite easy to spot though: they have large broad leaves that taper to a point and the plant forms a bushy conical shape as it grows higher with younger, smaller leaves. The flowers are either white or purple, are small and arranged in little lines of about seven spikey blooms (though I didn’t count). The leave themselves are covered in slightly rough hairs that are very slightly irritating if the leaves are large.
One thing to point out, and I only found this out after eating them, is that comfrey leaves are a little poisonous and shouldn’t be eaten in large amounts, nor should they be eaten if you have liver problems. You have been warned. 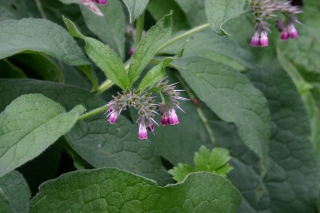 Collect some large comfrey leaves that still have a fresh green colour; the large warty dark green ones don’t look very wholesome to me. Take them home, wash and drain them then remove their stalks. Depending what you are serving with them, you will need one or two leaves per person, more if you are using the smaller tender leaves.
Meanwhile make the batter by mixing together 5 ounces of flour and a pinch of salt in a bowl. Whisk in a tablespoon of oil or melted butter and up to ½ pint of warm water to form a batter the consistency of double cream. The warm water will help thicken the batter a little. Lastly, whisk an egg whiteuntil stiff and fold into the batter.
Heat up some oil in a pan ready to deep fry the leaves. You know you’re at the correct temperature when a small cube of bread browns in about 45 seconds. Dip the leaves in the batter and fry on both sides until the batter is crisp and golden brown, around 4 minutes in all. Don’t be tempted to overcrowd the pan – the leaves will stick together and the whole thing will take much longer to cook. Drain on kitchen paper and season.
I took a photo but can’t seem to find it now. Whoops!
#357 Comfrey Leaf Fritters. I really liked these, though probably for the wrong reasons; the thin comfrey leaves were beautifully tender but essentially completely tasteless! The batter however was absolutely delicious – brown and crisp and bubbly and quite possibly the best batter recipe I have ever used. I’m going to give it 5.5/10 though because the star of the show should have been the comfrey, but it was just simply a vehicle for the divine batter.