Skip to content
‘The best of all buns, on account of their buttery melting sweetness, and the fun of uncoiling them as you eat them’
Jane Grigson

Chelsea buns are indeed delicious, and I think I may agree with Ms Grigson that they are indeed the best. Things are often a far cry away from their best when one makes them ourselves. And after all, what is the point of making something at home if it isn’t as good or better than what you can get in the shops?

The Chelsea bun is an 18thcentury invention, created in the Old Chelsea Bun House, situated between Chelsea and Pimlico. Curiously, noone is absolutely sure of its exact location, but it is known that Kings George II and III visited often. It finally closed in 1839. 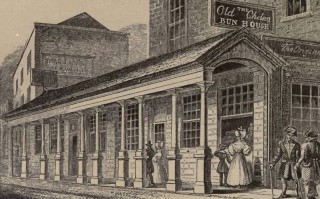 The Old Chelsea Bun House
For those of you not in the know, Chelsea buns are made from coils enriched bread dough filled with butter, dark brown sugar and dried fruit and brushed in a sticky sweet glaze.
To make your own Chelsea buns you will need to prepare a batch of #224 Basic Bun Dough, which I first made many moons ago and is also used to make #237 Hot Cross Buns.
Knock back the dough, stretch and roll it into a rectangle of approximately 12 inches by 18 inches so that it is set out before you like a landscape and not a portrait painting.

Melt 2 ounces of butter and brush the dough with it, then sprinkle 3 ounces of dark brown sugar evenly over that. Finally, scatter with 3 ounces of raisins and 2 ounces of candied orange peel. Make sure everything goes right up to the edges of your dough. Now start to roll it up; start at one far corner and carefully fold the dough over along the long side. 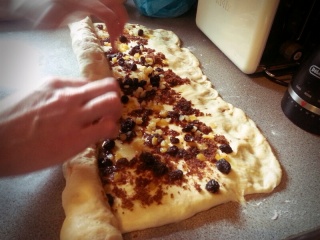 When you get to the end, go back to the start and start rolling up one section of a time. It needs to be quite a tight roll, so lift the rolled up dough a little to stretch it as you coil it up. Keeps going until it’s all rolled up – it’s quite easy to develop the knack.
Using a good serrated knife or a dough scraper, neaten the roll by taking off the two ends (these can be rolled up to make little teacakes). Now cut the dough into 18 equal pieces. This is easier than it sounds – first cut it into thirds, then cut those thirds into halves to make 6 pieces, and then cut those small bits into thirds again! Breaking it down like that ensures you get even-sized buns.

Grease one large or two medium tins and arrange the buns inside, leaving a gap of about half an inch between them and the sides of the tin. Brush with some beaten egg, then cover with a damp cloth so that they can prove for 20 to 30 minutes until the coils are just touching. Bake for 10 to 15 minutes at 230⁰C (450⁰F). While the buns are baking, make a bun wash by boiling together 5 tablespoons of water and 2 ounces of sugar until syrupy. When the buns are ready, the edges will be well-joined and the tops nicely browned. Brush over with the bun wash and sprinkle over some crushed up sugar cubes if liked.

It might be tempting to dive straight into the buns while they are hot, but they do eat better if cold or barely warm.
#370 Chelsea Buns. These were brilliant and better than any you can buy – the dough was light and fluffy, the fruit soft and darkly sweet. Excellent with a cup of tea. Definitely the best bread recipe from the Breadsection so far, and not as tricky to make as you’d think. Go and make some! 10/10. 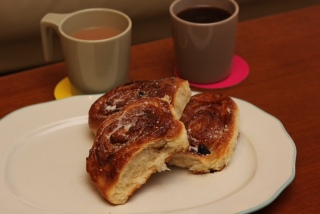 Here’s a raised pie that is versatile – you can use chicken, rabbit or any other game as its base. I went with game as I love cooking with it and love eating it even more. I’m giving you it just in time for the end of Britain’s game season. I would advise you go out and get some pheasant and pigeon right know – this was so good I have been making them in huge amounts for the market stall.
You can make pies of all sizes here – one massive one or many tiny ones. It’s up to you – look at the #282 Raised Pies post for more details on cooking methods. That post also goes through how to make the hot water pastry. If you want to make your own jellied stock, have a look at this post here.
For the filling, start by removing one pound of meat from the bones of your chosen game, rabbit or chicken and cut it into nice pieces. Keep any trimmings and bones.

Next, mince together 8 ounces of hard pork back fat (or fatback in America), 12 ounces of lean pork, 8 ounces of lean veal as well as any of the game, rabbit or chicken trimmings. You’ll also need 8 ounces of thinly sliced streaky bacon (unsmoked preferably); you use it to line the pie, but before all that, you’ll need to take 2 of the rashers and mince them. Mix all the meats together well – the most effective way to do this is to squeeze and squidge it through your fingers – incorporating 3 tablespoons of brandyor Madeira or 5 tablespoons of dry white wine as well as a good seasoning of salt and pepper as well as nutmeg, cinnamon and cloves plus a heaped tablespoon of chopped parsley.

Once you have made your raised crust – I did these ones in muffin tins and there was enough meat for just a shade under 40 pies! – line the pastry with the remaining bacon. Lid them and bake for the appropriate amount of time, my little ones took 35 minutes at 200⁰C (400⁰F). See this post here on how to make and bake a raised pie.
When cooked, pour in the jellied stock as normal (see this post here for help with that). Use the bones from your chosen star meat to make the stock.
Would you believe I forgot to take a picture of the finished product. What a plank I am.
#369 Game, Chicken or Rabbit Pie. As mentioned in my little introduction this pie was amazing, and by far the best of the raised pies so far; the pork and veal prevented the game flavours from becoming dominant, and the warming spices really gave the pie a taste and aroma air of old-fashioned England. I must try this pie with chicken and rabbit soon. I hope it is as good without the game! 10/10.
Join 5,460 other followers