Skip to content
Unlike other sausages, Cumberland sausages are not made into links, but are allowed to form large coils. You can buy whole coils to fry or bake for a family dinner, or buy lengths of it.  In Richard Woodall’s butcher shop in Waberthwaite, he would measure out yards of sausage using two drawing pins stuck on his counter. Amazingly the shop is still going strong over eight generations!
For me, the Cumberland is the quintessential English sausage; highly seasoned with salt, black pepper, herbs and spices. It shouldn’t have much else added to it, other than a little rusk or bread to soak up the fat. They have been made like this for centuries. Indeed, all sausages were made as one long coiled piece, until the addition of links was introduced in the early seventeenth century. The meat should be coarsely chopped or minced, not like your typical bizarre and homogenous cheap supermarket sausages that are ‘a bland, pink disgrace’, as Jane puts it.
A Cumberland ring is fried or baked, often secured in shape with two skewers before cooking.  It is commonly served as part of a breakfast. Jane mentions that at Rothay Manor, it is served with bacon, tomato, fried egg on fried bread, apple, black pudding and mushrooms; surely the breakfast of champions! It can be served with mashed potatoes and peas, or with a stew of green lentils and bacon cooked in red wine. 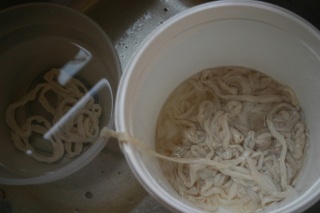 To make sausages, you need some natural sausage casings, which you can buy very cheaply from any butcher who makes his own sausages. Often he’ll give you them for free. They are very easy to prepare. All you need to do is soak the in cold water for an hour to remove any salt, find an end (this is quite tricky, as they are very long and not too dissimilar to tapeworms!) and carefully fit a funnel into it to rinse out the insides of the skins with more cold water. Once the water as run all the way through, the skins are ready to use, so pop them in the fridge until needed. Any unused skins can be kept in the fridge for four weeks. For these sausages you’ll need hog casings. 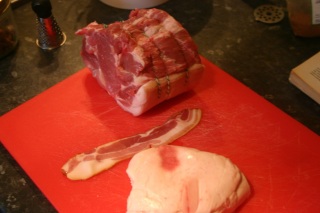 First of all, prepare your meat ready for the mincer by cutting the following into strips: one pound of boned shoulder of pork, 6 ounces of pork back fat and half (yes, half!) a rasher of smoked bacon. 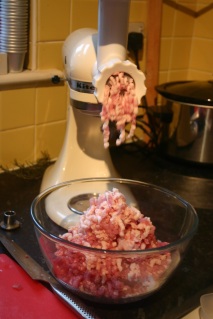 Pass all of these through the mincer using the coarse blade, then again using the medium blade. (I have no medium blade, so just used the coarse one again.)
Using your hands, mix all of these together in a bowl along with an ounce of white breadcrumbsand a quarter teaspoon each of ground nutmegand mace. Season with salt and pepper. I used a teaspoon of salt in all and was pretty heavy on the pepper too. Curiously, Jane does not add any herbs to the mixture, but if you wanted to, dried sage or marjoram are typical.
Now it is time for the fun and games: filling the sausage skins. To do this, I used the sausage stuffer attachment for my Kitchen Aid. The amount of sausagemeat made here easily filled a single hog casing (each one is at least 3 yards/metres long, I reckon). 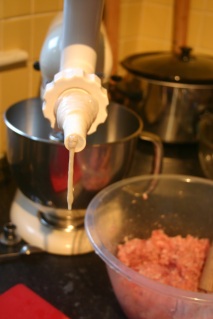 Prepare the sausage skins as described above. Take one and slide it over the funnel of the stuffer, tying a knot in the end. Now feed the sausagemeat through the machine and into the casings. Here, you need to grasp the sausage as it comes out so that it fills the skin properly making no major air bubbles. This is tricky to do if you are simultaneously feeding the machine with sausagemeat, so an extra pair of hands will come in useful. 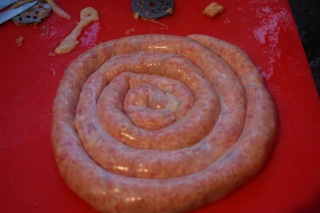 As you make more and more sausage, let it land upon a plate to form the characteristic coil. When all the meat has been stuffed into the skin, cut and knot it, leaving some slack for expansion when cooking. Chill the sausage overnight (which I forgot to do, in my eagerness, making it rise up in the centre when in the oven).
Now you can fry the sausage in a pan, turning it over at half time. Alternatively, bake in the oven for 30 to 45 minutes at 180⁰C, pricking the skin before it goes in. Of course, you don’t have to cook the whole thing at once; you can cut lengths off it and fry those up instead. 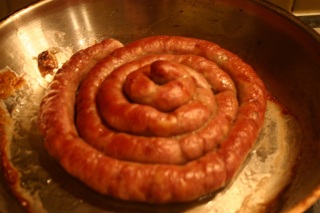 #415 Cumberland Sausage. This was absolutely delicious, and quite simply the best sausage I have ever eaten! With something simple like this, it is all in the seasoning and the half-rasher of bacon worked wonders in that department. Who’d have thunk it, a real bona fide secret ingredient!? This, along with the freshly-ground pepper and the warming mace and nutmeg, made such a winning combination, that I have been making vast amounts of sausages, sometimes for frying up, or sometimes for sausage rolls. I cannot gush any more than this: 10/10