I hardly ever buy or eat prime cuts these days, going instead for the underused bits and bobs of cows, sheep and pigs, so it’s nice to have the excuse to indulge myself for this blog entry. The tenderloin is the fillet cut of a pig and runs down the length of the spine. These fillet cuts are very tender because the muscle controls the posture of the animal and is not used in high stress activities such as locomotion, toughening it up.

The pork tenderloin is less used in English cookery compared to its cow and sheep equivalents, but I think it is the best value of the three, they are pretty substantial, cheaper by the pound and not as prone to drying out in the cooking process these days now that British pork can officially be served medium.

Jane reckons that the best way to eat this cut is to roast or braise it, so here is her recipe which also involves ham and bacon! A porky trinity and no mistake. There’s also the unusual inclusion of crumbly Lancashire cheese. Pork, ham, bacon and cheese; that’s all of the major food groups, right?
Take two pork tenderloins and trim away any fat and sinew with a sharp knife, should there be any, then slit them lengthways, but not all the way through, so that you can open them out. Now beat them with a tenderiser or a rolling pin until they are much wider and flatter.
Next prepare the ingredients for the stuffing: take two large slices of ham and shred them finely, thinly slice three ounces of Lancashire cheese, then blanch eight sage leaves in boiling water for one minute, then half them. If you prefer, you could strip some thyme leaves and use those instead of the thyme, the bonus there being that no blanching is required.

Scatter the two opened tenderloins with the ham, then the cheese and sage (or thyme). Close and then tie with string and brown them quickly in a little butter.
Now, slice two large onions and scatter them on the base of an ovenproof dish and lie the tenderloins on top. Adorn them with two rashers of streaky bacon each, then pour over a quarter of a pint of brown sherry, Madeira or port. 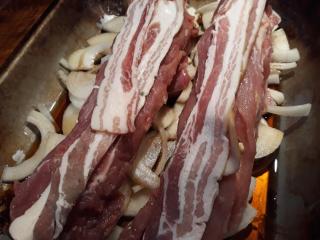 #433 Stuffed Pork Tenderloins. Well this was a good one, though I did mess up a little bit as I forgot to beat out the tenderloins, and to tie them, AND to brown them in butter. Nevertheless, it was still delicious, though a little dry (probably because they weren’t tied up). Oh well, I can’t be expected to be perfect all the time, now can I? I’d certainly recommend you give it a go, though I’d check them after 30-35 minutes to see if they are done. The sauce – like most of Jane’s – was delicious. I give it a solid 7/10.