Here’s a straight-forward recipe from the book that I have never gotten around to cooking, mainly because it sounded like it might be a bit boring. These days, however, I reckon I can spot a good subtle recipe, and thought I should give it a go. It’s one that requires careful seasoning as the only ingredient with flavour is the mange tout peas; not the strongest of flavours and served chilled too! You’ve got to use the salt, pepper, sugar and lemon juice in this recipe with a little abandon to pull this one off.
The first edition of English Food was written in the 1970s and this recipe is very much a thing of its time. Jane calls these creams, but they are basically a savoury mousse, the only other savoury mousse I have made from the book was the disastrous #313 Jellied Eel Mousse with Watercress SauceI cooked back in St. Louis in 2011. 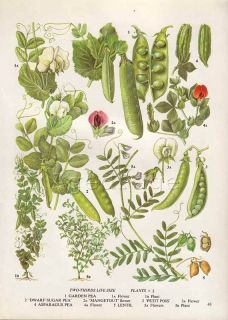 A colour plate of the range of pea cultivars, including mangetout just below centre (New Oxford Book of Food Plants)
In the ‘70s the mange tout was quite an exciting new vegetable, though they were old hat to gardeners. A mange tout (or snow pea, as it is called in the USA) is a regular pea that has been bred so that the pod is much less tough than usual, so that the normally flavoursome but inedible pod can be eaten. The pea has been loved by gardeners because of the diversity of variants that can be easily produced, and it is worth mentioning a particularly important pea gardener, Gregor Mendel, the father of modern genetics. 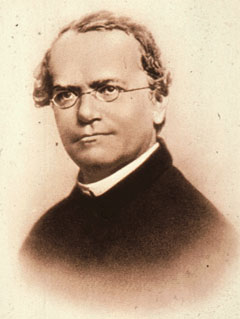 Gregor Mendel
The monk bred mange tout peas and noticed, simply by looking at traits – and the proportions of the traits – passed down from parent plants to their progeny. He looked at traits such as dwarfism, seed colour and seed texture. He concluded that factors (i.e. genes) were passed down from parents, these factors came in different versions, called alleles. For example, seed texture came in two forms, smooth and wrinkled. One seemed to be dominant over the other, so which two versions of the gene an individual had determined how it looked (its phenotype). For more on this click here.
Scientists in the 1920s combined his findings with Darwin’s theory of evolution by natural selection, to come up with the Modern Synthesis, providing us with a framework for thinking about genes, selection and evolution.
Ok, enough science waffle, back to the cooking…
You’ll need a pound of topped and tailed mange tout for this recipe. Keep aside a quarter of the peas and put the rest in a saucepan containing half a pint of boiling water along with two teaspoons of finely chopped spring onion green (later the recipe requires gelatine, if using powdered gelatine, keep a few tablespoons of the cooking liquid aside for dissolving it in).

When the peas are tender, liquidise the whole lot and push through a fine sieve, pushing the pulp through with a ladle. 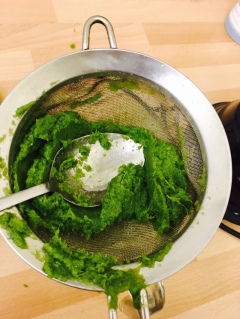 Dissolve one 11g sachet of powdered gelatine in the remainder of the hot liquid and stir into the puree. If using leaf gelatine, use the appropriate number of leaves according to the pack; factoring in that there will be eight fluid ounces of cream added later.
Season well with salt, sugar, pepper and lemon juice – it’s best to slightly over season here as the flavours will be less pronounced once chilled. Pop it in the fridge and chill until it has the consistency of egg white. Take it out and fold in eight fluid ounces of double or whipping cream, whipped until floppy.

Next, fold in two egg whites that have been beaten until stiff. For maximum lightness, use a metal spoon for this task.

Jane says to pour the mixture into sixteen moulds, but I poured it into eight moulds, to make easier for service. Cover, pop in the fridge, and the mousse set overnight. It should keep four or five days, so you can make this well in advance.

Blanch the remaining mange tout in boiling water for two minutes, drain and plunge into iced water.
To turn the moulds out, dip them in boiling water and invert into plates, or use a blowtorch. Decorate with the blanched mange tout in an appropriately artistic fashion. Serve with Melba toast.
#424 Chilled Mange Tout Creams. These were great – light and refreshing and perfect this time of year – I put them on the menu as Mange Tout Mousse, seeing as that is what I made. They didn’t sell! I think the word moussemaybe made them sound like they were on the naff side of retro; should have kept Jane’s name for them. All that said, I would say to give them a go. It has made me think that mousses need a bit of a comeback. I give it a solid 7.5/10.
NB: You could use lots of different vegetables for this dish if you don’t like peas. Just make sure you only blanch the vegetables to the point of just becoming tender, you want them as fresh-tasting as possible. Asparagus, carrot and red pepper spring to mind.