Well I was hoping to do a really special 250th recipe, but due to my busy schedule I didn’t get round to it. Instead what I had to do was try and empty my freezer of as many things as possible before I left for Texas, which meant a lot of fish after my big order from The Fish Society (an excellent website, by the way). So it is quite bizarre that this little landmark recipe has to have the least English name! The ingredients are very English and despite the French name, the dish was created by an Englishman called Christopher Snow. The exciting thing about this recipe, is the inclusion of the smoked cod’s roe – quite a cheap ingredient, but tricky to find, and one I’ve never eaten before. It looked quite scary and alien-esque in its packet and I wasn’t sure about it, but it is part of the fun of this experiment. Plus none of the meat or fish has been bad thus far….

This is a very easy dish to prepare as there is hardly any cooking required at all. The recipe serves four, but it can be easily increased or decreased in ratios for any number:

Start off by boiling four large eggs; Griggers is very precise about this, so listen good. Place the eggs into already boiling water and leave for precisely six minutes (seven if they are extra large eggs). Remove and run under the cold water to cool them down. Meanwhile, cut four slices of wholemeal bread and cut them into circles, removing a smaller circle from the centre and butter them and then place them in the centre of a plate. Now prepare the roe: peel away the skin of a four ounce roe and beat the pink centre with four tablespoons of double cream until thick, this should only take thirty seconds and then season with black pepper. Peel the cool eggs and wrap a piece of smoked salmon around each one and place it in the little brown bread stand you have made. Lastly, spoon the roe sauce over the egg (this is quite tricky as it is quite thick, so I did a quenelle instead, pretty posh, eh?). 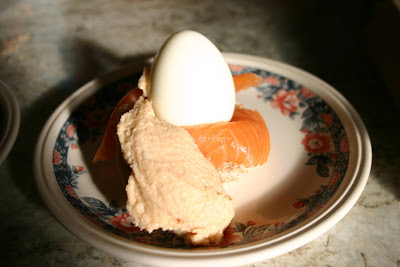 #250 Oeufs Mollets Christophe. “Occasionally when one goes out for a meal, some dish appears which is so delicious and simple that one is angry not have thought of it oneself” says the Grigson. Well I wouldn’t go that far, but it was pretty good. The eggs were cooked to perfection using her method – the yolks were still runny and creamy and complemented the smoked salmon very well (a classic combination, of course). The smoked cod’s roe was really delicious too, rich and heady with natural hot smoke, the only problem was that it was so very rich and it needed some lemon juice to cut through it, I think. That or just less of it. I think with a little alteration, this could be really excellent. 7/10.

Oh it HAS been a while, hasn’t it? I have been so very busy with getting ready for my move to Houston, I haven’t had the time to tell you all about the food I’ve been cooking. I have arrived in Texas now, by the way but haven’t really had much of a chance to explore the place, in fact I still have a bit of jet-lag. I shall fill you in about Houston soon, I’m sure.

Back in England it is blackberry season and those brambles that are so annoying and prickly for the rest of the year finally earn their keep. This recipe uses them, and so it was a great chance to try something that isn’t blackberry and apple pie (nice though it is). I made this in Derby visiting Simon and Rachel and the farm they are trying to set up as a cooperative eventually. They also keep bees and I used some of their delicious honey for this recipe too. If it isn’t blackberry season any soft fruit will do. 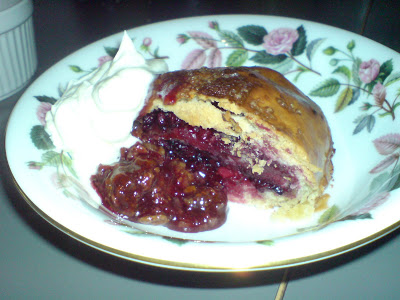 First make a shortcrust pastry with 8 ounces of flour and 4 of fat (butter, lard, or a mixture) plus cold water and roll it out into an oblong shape. Spread 4 fluid ounces of runny honey over the pastry and then sprinkle 8 ounces of blackberries over it. Roll up the dough so that it makes a sort-of Swiss roll, tucking the pastry under at the edges. Place in a small ovenproof dish and pour over 4 fluid ounces of single cream. Bake at 200⁰C for 45 minutes. Serve with thick cream.

#249 Isle of Wight Pudding. A really good pud this one, and cheap too! The best thing about it was that the juices from the berries plus the honey and cream heat up to form a delicious toffee sauce. The top goes very dark and forms a good crust, though it doesn’t make the dessert look very pretty. Give it a go – quick and simple. 7/10