I’ve heard of the lardy cake and once saw someone making one on telly. I remember thinking that it looked pretty marvellous. For those of you that have never heard of lardy cakes, they’re basically a sweet sticky bun, but instead of enriching it with butter, lard is used; it’s layered along with sugar and mixed fruit through white bread dough. These ingredients meld together to make a moist, sticky and very rich teatime treat. It is quite possibly the least healthy thing I’ve ever cooked, and Jane Grigson reckons it’s on the “skinny side”! 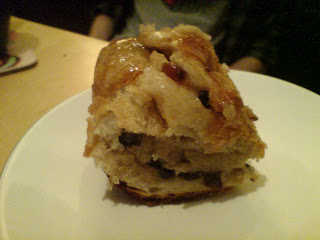 Start off by making some bread dough using a pound of flour (follow this method if you don’t have your own recipe, but adjust amounts accordingly). Whilst you’re waiting for it to rise, measure out 6 ounces of lard and chop it up, 6 ounces of mixed dried fruit, 2 ounces of mixed peel and 6 ounces of granulated sugar. Once the dough had risen, and you’ve knocked it back, roll it out into a long oblong and spread the first two thirds of it with a third of the lard, fruit, peel and sugar. Fold this into thirds and press or tuck the ends under, give it quarter turn and roll out the dough again. Repeat this process two more times so that all the fruit and sugar are used up. Place the rolled up dough in a large tin that is oblong or square in shape and let the dough prove. Bake for 35-45 minutes at 220ºC. Turn it out onto a plate so that the sticky side is facing up and so that the lard can soak through the bread. Serve warm or cold.

#104 Wiltshire Lardy Cake – difficult to score this one; we tried it warm and it’s either 9/10 or 2/10. It’s tastes really sweet and is beautifully sticky with lovely plump juicy raisins, but has the bizarre savoury meatiness of the lard. I think if I were to cook it again, it would have to be even more skinny than Griggers’ measurements. However, once it was cool, it did taste less, er, meaty. Give it a go – easy and cheap to make, so I think I’ll go with a final score of 7/10.