I came across some marsh samphire in the fishmongers the other week – I had been looking for it previously and thought I would have to go to extreme lengths to get hold of it – I bought it, just in case I never came across it again. Luckily, Griggers mentions in English Food that samphire can be successfully frozen by blanching briefly and then popping into the freezer.

Samphire grows on the salty soil near the sea, and marsh samphire grows in salt marshes. The word samphire is a corruption of the French Saint Pierre, the patron saint of fishermen. He was obviously looking after them by providing the coastal veg. Samphire comes/came under several names: sea asparagus, glasswort (it was used in glass production), crab grass and frog grass. Keep a look out for it when you are near the sea – rock samphire grows well on Dover cliffs, but collecting it is a precarious activity – ‘a dreadful trade’, according to Shakespeare in King Lear. Best stick to the marshes, if you want to try and collect your own.

Samphire is dealt with in two ways: pickling or boiling. Boiled samphire is generally served as a vegetable with fish or lamb or with a hollandaise sauce (which I did, along with some pan-fried sea bass). To do this, boil rapidly in unsalted water until tender, this should be just five minutes. Drain and serve. 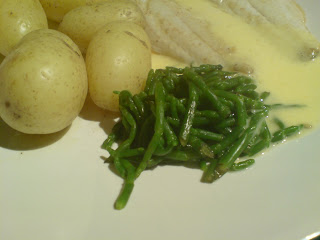 #176 Samphire. 5/10. It seems that the blanching and freezing technique is not as successful as indicated by Griggers; they were unfortunately left all soggy and not at all crisp and tender. The flavour however, was good; salty and sweet with a mild taste of ocean ozone. I think that I shall try it again but without freezing it this time.