The second of the three rabbits/rarebits that appear in English Food (the third being English of course). After the appearance of Welsh rabbit in the early eighteenth century, and its subsequent popularity, meant that it diversified. Griggers finds this recipe in Hannah Glasse’s 1747 book Art of Cookery. Scotch rabbit seems much easier (and cheaper, natch) as the only ingredients are cheese, toast and butter. The recipe is in fact just lifted directly out of her book, so that is what I’ll do:

This is what I did: I cut the cut and laid it on a piece of buttered grease-proof paper in the hope it could grill it and turn it over. This was not the case as you can see by the photo! 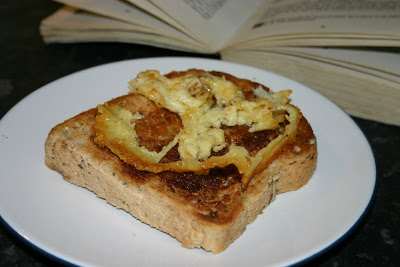 #183 Scotch Rabbit (Rarebit) – 2/10. What a pathetic sight it was. The cheese just stuck to the paper and ended up a big mess. What I don’t understand is that normal good-old cheese on toast is better, tastier and above all easy to make. There is no wonder at all why the Scotch rabbit never took off.