I am still trying to count the pennies at the minute and this recipe was designed to be cheap to make as it is from Alexis Soyer’s book Shilling Cookery for the People (1845). I’ve mentioned Soyer before in the blog – he was a French chef who wanted to help the people and the book was one way. He was also a pioneer – he helped develop cooking on gas and ovens with adjustable temperatures. Anyway, I did baulk at this recipe: shilling cookery with veal in it!? However, I was wrong; I managed to get hold of a veal knuckle to make the soup for just 25 pence from the Orton Farmers’ Market. Bargain. You may have some reservations about eating veal, but these days you really don’t need to – I’ll discuss that in a later entry though.

I love how the book has two vegetable soup recipes and neither even entertain being vegetarian! Brilliant. We love Griggers!

To make this soup you need to begin by making a veal stock: You need to get hold of 2 pounds of veal knuckle – it seems that they are quite easy to get hold of as long as your butcher sells veal in the first place. Ask the butcher to chop it into small pieces – I couldn’t as I was at the market and had to do it myself which was a nightmare to do. Place the knuckle pieces in a large pan along with 2 ounces of butter; 2 ounces of chopped, lean unsmoked bacon; 3 teaspoons of salt; ½ teaspoon of ground black pepper; 6 ounces of sliced onion; and ¼ pint of water. Bring the water to a boil and stir the ingredients for around 10 minutes. An opaque whitish stock is created. Now add a further 4 ½ pints of water and bring to a boil, then skim, then simmer for 45 minutes. Strain the stock when cooked. You can do all this in advance, of course.

For the soup itself you need to dice some vegetables: around 8 ounces of turnip, Jerusalem artichokes or carrot, or a mixture; plus 3 ounces of mixed onion, leek and celery. Melt 2 ounces of butter or dripping in a pan and add the diced vegetables along with 2 teaspoons of sugar. Stir them until they caramelise and, when ready, add 3 pints of the stock. Simmer until the vegetables are tender. Lastly, stir through 2 tablespoons of chopped parsley or chives, or both. Serve with brown bread and butter. 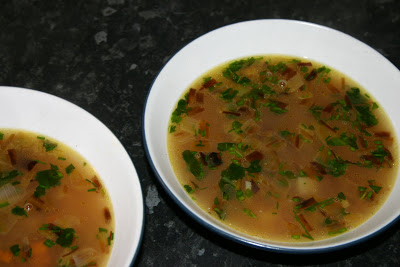 #187 Soyer’s Clear Vegetable Soup. This was an unusual soup; I can’t decide if I liked it or not. I was a very thin soup that wasn’t hearty at all, so it didn’t fill any gap in my stomach! It was saved by the sweet vegetables and their caramelised coating that darkened the soup and made look quite attractive. Not sure if I’d make it again though – 5/10.