I’d heard of jugged hare before and had always assumed that ‘jugging’ meant that some strange spices were added, but it simply means that it is cooked in the jug. The idea being that the hare can cook away in the jug that is, in turn, in a pan of simmering water. The way of cooking goes back to when people had to cook over their hearths. Jugged hare therefore has gone out of fashion because we make it into a casserole or stew (as in this recipe here) in the oven. I bought the hare from Shaw meats a few months ago and had had it stowed away in the freezer for quite a while, so it was perfect as the main course of my emptying-the-cupboards themed dinner party. Here’s how to jug a hare (or a large rabbit).

First joint your hare, and if you like lard it with some bacon fat or pork back fat. It is wise to do this if the hare is not a youngling. If any blood that drains off, keep it in a bowl (in fact, if you can get the butcher to keep the blood when hanging the hare, even better), rub the hare with salt, black pepper and Cayenne pepper and place the pieces in a large stoneware jug along with an onion that has been studded with three cloves, a bouquet garni (I used, parsley, bay, rosemary and pared lemon peel), and four ounces of butter. Cover with foil and tie securely and tightly with string. Place the jug in a roasting tin half-filled with boiling water, put it on the heat and bring to a simmer and then cook on the hob or in the oven for three hours.

When cooked, remove the pieces and allow them to rest while you make the gravy. Strain the juices (there will be a surprisingly large volume) in a sauce pan and add a quarter of a pint of red wine, a chopped anchovy and a pinch more of Cayenne pepper. Bring to a simmer and thicken: either with a beurre manié made from half an ounce of butter and a tablespoon of flour mashed together and added in knobs, or by adding the blood of the beast (don’t let the sauce boil though, otherwise it’ll will go like pink scrambled eggs). The blood I had reserved was only a small amount so I popped it in at the end. Lastly, add a squeeze of lemon juice. Griggers suggests serving it with fried bread, but I went with game chips (see here), forcemeat balls (see here) kale and ‘Carrots from 1599’ (see the next entry, when I get round to writing it). 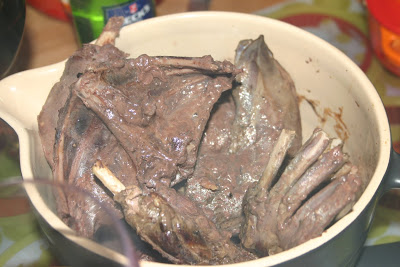 This pic makes the hare look rather unappetising, but it did look good in real life!

#219 Jugged Hare. A really good hearty winter stew this, the hare was very well-flavoured and gamey and the gravy was really delicious – very dark and very rich. Although it was good, it wasn’t as good as the hare stew I did last winter, which had a much more complex flavour. Still, it deserves an above average 6.5/10.