One of Griggers’ main bugbears in the 1970s was the massive decline in the quality of all things bready. There are of course artisan bakers that do make excellent bread – Barbakan in Chorlton, Manchester is the one near me – but generally it is the supermarket bread we seem to buy and endure. Of course, nowadays, supermarkets have in-store bakeries in supermarkets, so there are improvements, but it is still bread done in the cheap with additives. I think the point that Jane is getting at is we don’t know how good bread can be because we don’t bother to bake it ourselves. This is a shame, because artisan bread can be easily gotten hold of at a fraction of the price of a supermarket loaf, if you bake it yourself. I am trying my best at this concept and am getting better. This recipe is one that Griggers hails the most as it can be used as a base for hot cross buns and Chelsea buns; the supermarket ones are “dull” and this is because the ingredients that make them so good are omitted, such as sugar, eggs, butter and milk.

This recipe can be used as a base, but I wanted to see what the simple rich basic bread buns tasted like, partly through interest, but mainly because I wanted to do a practise one before I do the hot cross buns on the run up to Easter.

Begin by mixing together a pound of strong white bread flour with a quarter of a teaspoon of salt in a warmed mixing bowl. Measure out 2 ounces of caster sugar, and place one spoonful of the sugar into a pudding bowl along with an ounce of crumbled fresh yeast into a pudding bowl and four ounces of flour from the mixing bowl. In a jug, mix together a quarter of a pint each of milk and boiling water straight from the kettle. Whisk this into the yeast mix to form a smooth batter and leave to rise for around 15 minutes until the whole thing has become a satisfying yeasty cushion. Whilst you are waiting for it to rise, stir the remainder of the sugar into the flour and rub 3 ounces of butter into it. Make a well in the centre and pour in a lightly beaten egg and the foaming yeast mixture and mix together with a wooden spoon to form a dough. Turn the dough out onto a floured surface and knead for a good 10-15 minutes adding flour as you go so that the dough is slightly rubbery and “a moderately tacky, but not sticky, texture”. The mixing bowl should then be washed and greased so that the dough can sit inside and rise and double in bulk – make sure you cover it with some cling film or a damp tea towel. Fresh yeast rises much quicker than dried, so it’s great if you are an impatient bread-baker. 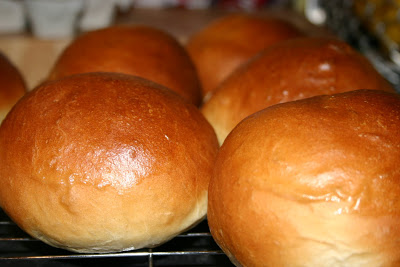 The bread can be used for whatever purpose you like, but if you want them au naturale, then roll the dough into a long sausage shape and divide into 12 pieces and form them into round buns. Place on a baking tray lined with baking paper, leaving gaps for when they rise. Cover them and prove for at least 30 minutes. Bake for 10-15 minutes at 230⁰C, remove and brush them with some milk to make them shiny when they cool.

#224 Basic Bun Dough. This bread was delicious! Slightly sweet, rich and very fluffy. I can’t wait to do the hot cross buns – they must be divine because these basic buns are a 7.5/10.