Skip to content
He was as ful of love and paramour
As is the hyve ful of hony sweete:
Wel was the wenche with hym myghte meete.
The Cook’s Tale, The Canterbury Tales
There are recipes in English Food that get me very excited indeed and this is one of the most exciting. This doucet – which means something sweet – is a custard tart that was served up at Henry IV’s coronation, alongside fritters, and candied quince (which I made quite a while ago, see here). Also on the banquet table were ‘curlews and partridges and quails and rabbits and small birds of many kinds’. Posh folk around this time would put pretty much anything into a sweet tart. It didn’t matter as long as there was sugar in it so they could show off how rich they were. A particular favorite was fish. Vile. 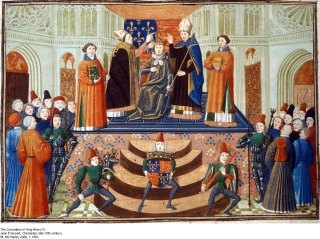 The Coronation of Henry IV
A custard tart may seem rather a plain dish, but remember this was October 1399 and this tart was laced with saffron and honey which were very prized ingredients. Indeed, it may have been sweetened with sugar too – which then would have cost a small fortune.
Henry IV spent most of his reign trying to prevent various plots against his own life – this was because the previous ruler, Richard II (some guy called Shakespeare wrote a play about him) went on a crusade and while he was away Henry began a military campaign to take Richard’s land and effectively earned the right to the crown. Richard wasn’t best pleased when he got back, but before he got the chance, he was thrown in the tower and starved to death. No curlews or partridges for old Dicky-boy. Henry IV also legalized the burning of heretics.  Read more on the lovely Henry here.

Canterbury Tales Woodcut, 1484
Not all was bad though. It was during this time that modern English was born. It was quite a strange thing – prior to these years all the texts were written in Latin and then, seemingly out of nowhere, English appeared all fully-formed. One of the key texts that shows this off is ‘The Canterbury Tales’ by Geoffrey Chaucer, who was present at the coronation. Also, Henry’s address was the first to be given in English. So this really was a key part of English history. This is why cooking food from this book can be so exciting – a chance to have a real glimpse into history. You can read books, go look at paintings, or walk around a magnificent cathedral, but EATING something that people once ate has some other connection; a personal connection that can only be achieved with food.
Anyways, I have wittered on enough. Time for the recipe…
Blind bake some shortcrust pastry in a 9 inch tart tin – about 20 minutes at 180°C (350°F) should do it. Cover with baking parchment. Use baking beans to keep the pastry supported otherwise it will collapse and be a disaster. Remove the beans and paper for a final five minutes so that it can crisp up a little (at this point I lost track of time and slightly overdid mine, oopsey. Whilst it is baking, make the filling: In a saucepan bring 12 ounces of double cream and 3 ounces of Channel Island milk alongside a decent pinch of saffron and a tablespoon of either honey or sugar to a boil. It’s important to note that the creams are measured by weight, not fluid ounces. Whilst they are coming to a boil, beat together 2 eggs and 2 egg yolks in a bowl. When the creams boil, pour them over the eggs whisking as you go. Add more sugar/honey if you want – I added about three tablespoons of honey in all. Pour through a sieve into the blind-baked pastry case and bake at 180°C (350°F) until set – around 15-20 minutes. 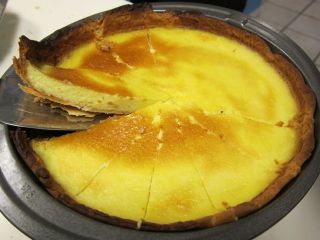 The slightly over-done Coronation Doucet
#264 A Coronation Doucet. O! I loved cooking this. And I loved eating it too. It wasn’t even that nice; but the experience was so exciting. The custard was not very sweet, unlike what we are used to these days, but then in ye olden times there were no proper courses so sweet and savoury were not kept separate like nowadays. The saffron came across quite strongly too. I think if the sugar or honey was piled in, it wouldn’t have seemed out of place. This was the third recipe I did from the book for Thanksgiving, so I am not sure how my American chums found it (hopefully I will find out in the comments…). Scores? Hmmm, well probably a 4/10 for actual flavour, 10/10 for geeky excitement
﻿