I decided that I needed to get back into doing some proper cooking now that I have a new stove in my new apartment. I invited some people around from work and their various spouses and kids. It is pretty hot here in St Louis at the moment so I needed to choose a recipe that was nice and summery and not all hot and stodgy. It needed to be buffet-style as there would be eight of us in all and I can only fit four around my little table. It also needed to be one that is prepared in advance so I wouldn’t be rushing around in the 35°C heat on the day. I don’t ask for much do I? Oh, and it also couldn’t be weird. My options for this kind of food are rather limited in the book now, but I happily found this one that seemed fresh and clean and rather Mediterranean in style. 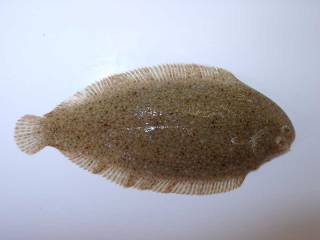 The sole lies on its side on the sea bed to camouflage itself.
Over time, natural selection has reacted to this by moving one eye
so that they both sit on one side of the head.

The word caveach refers to a method of preserving fish by cooking and then pickling it and comes from the Spanish escabeche. I did a little research on the preservation method and could only find books from the early-to-mid nineteenth century that mention it in any detail; though it seemed popular in both Britain and America at that time. The recipe below is more of a dinner party adaptation where the fish is only left for a few hours to pickle and isn’t intended as a preservation method at all. You can caveach any fish you like – the most popular seemed to be mackerel, herring and sardine, presumable because they were the cheapest and most common seafish at that time.

It is also nice to cook a receipt from the Seawater Fish section of the book – options are limited in America because there are different species of fish found commonly in their waters compared to European waters. However there is some common ground and the newly-discovered and very excellent grocery store Straub’s has a great selection of fish and meat as well as some other tricky-to-find ingredients, so I’ll be using them quite frequently during my time here in Missouri.

First of all prepare your sole fillets – you’ll need eight in all. Flatten them a little with a rolling pin, season with salt and pepper and fry them quickly in a little olive oil so that they brown a little. Cut them into thirds and arrange the pieces on a serving dish. Slice a medium red onion thinly and scatter over the fish along with the thinly sliced pared rind of a lemon and a couple of bay leaves cut in two. Next mix together seven fluid ounces of olive oil with three tablespoons of white wine vinegar and pour over the fish. Season again with salt, pepper and some Cayenne pepper too. Cover and refrigerate for at least a few hours, but preferable over night. When it is time to serve, scatter over some chopped herbs – parsley, coriander or chervil are suggested by Griggers. I went with coriander. Serve with bread and butter and a salad. 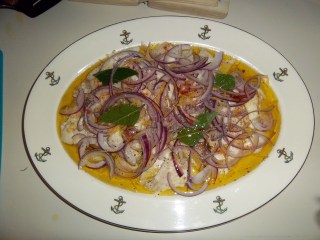 #302 Caveach of Sole. This was everything I had hoped it would be – fresh, clean and slightly piquant. The delicately flavoured sole was not overwhelmed at all by the onions and the mild seasoning. A very good recipe this one – and simple too. I think I am going to try it with other, cheaper fish in the USA like tilapia or catfish. Any fish would work I reckon. A dinner-party stalwart this one will be, I feel. 8/10.