For the meaty part of the dinner party I mentioned a couple of posts ago, I thought I would attempt a Guard of Honour. For those of you not in the know, a Guard of Honour is an attractive way of presenting roast rack of lamb by taking two racks and sitting them upon a roasting tray so the rib bones ‘bristle like a military row of crossed stakes’. The Guard can then be stuffed if you like. Jane likes, as this recipe includes the herb stuffing that I have made a few times now.

I did a little research on this dish, assuming it would be a very old one, but was surprised to find that I could only find relatively contemporary recipes, with none cropping up even in the nineteenth century. Odd.

Griggers recommends buying a whole best end of neck of lamb and to ask the butcher to split it in two down the backbone and to get it chined between each rib so that you can carve the joint easily later. To chine is to cut the backbone. If this wasn’t done, you’d have some thick bits of bone to wrestle with. Ask him to leave on the long bones of the ribs. This part is a rather difficult thing to achieve in America for a couple of reasons. First, the joint called a best end of neck means nothing and second, lamb is generally imported from New Zealand and pre-butchered, at least in part. It’s quite easy though to get hold of a couple of matching racks and to simply not have the extra-long bones.

To make a Guard of Honour, take your two racks of lamb and scrape the skin and fat from the very thin part of the chops to expose the bones, then score the fat on the chops and rub in salt, pepper and rosemary or thyme into it (I went with thyme). Stand the joints up and allow the ribs to cross over each other. Fix them in place with skewers. The cavity within can then be filled with herb stuffing. I found the easiest way to do this was to turn the joint upside down, opening it up, so that the most stuffing possible could be added. (Thanks for taking the photos, Joan!)

Turn it the right way up and press the sides together gently, scraping away any escaped bit of stuffing. Check the security of your skewers and place on a roasting tin. 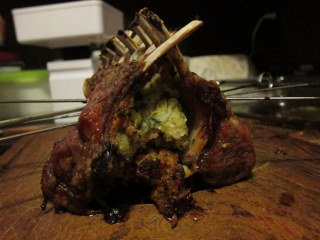 The meat can be carved, after a period of resting, nice and neatly, giving two chops per person.

Serve your roast lamb with any of the trimmings Jane suggests here. She does mention that the stuffed tomatoes recipe goes very well with Guard of Honour, but I wanted to do other things…

#305 Guard of Honour. I really liked this. I did make it because I was in the mood for lamb. Usually I like my lamb pink, but the delicious herb stuffing helped to keep the well-done meat moist and flavourful. I must admit it wasn’t quite as impressive as it should have been because I couldn’t give the precise instructions to the butcher in the preparation of the joint. I think I shall do some of the more tricky lamb recipes back in Blighty. This is only a little complaint of course and the recipe was very good indeed. 8.5/10