Skip to content
There are ingredients for recipes in the book that I really thought I wouldn’t be able to find, and one of those is smoked mackerel. Smoked mackerel was a new addition to English cuisine at the time of writing English Food and these days it is quite easy to find in supermarkets. So why is there a problem? Well, Griggers says to keep away from the hot-smoked (i.e. cooked) mackerel as she says it often ends up as mush; no, only cold-smoked mackerel will do. When I lived in Britain, I had no luck finding anywhere that sells it. However, here in Saint Louis, as I was having a walk around Global Foods – a large international food market – what did I happen upon just sat there in the refrigerator as bold as brass? Yes, a large cold-smoked mackerel. It is amazing what you find when you’re not looking. It turns out that cold-smoked mackerel is very popular in Eastern Europe. It obviously didn’t catch on that well in England, though Griggers gets full marks for trying to push it.
Like many recipes in the Cured Fish section of the Fish chapter, this isn’t really a recipe, as there is no cooking involved, it’s really advice on how best to serve it. 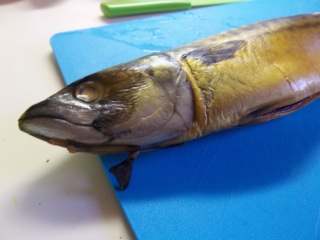 First you need to fillet the fish, removing any bones, and arrange pieces of the fillet on a plate. I was pretty impressed with my presentation here; I’m not very good at that sort of thing normally. She suggests serving the mackerel with lemon quarters and brown bread and butter. Because there was no cooking involved, I felt it was a bit of a cop-out recipe, so I baked some bread myself. Jane also suggests making a gooseberry sauce flavoured with horseradish. There is zero chance of finding gooseberries here in Missouri so I couldn’t do that part, but it was just a suggestion, so I reckon I can let myself off… 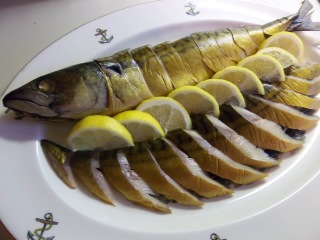 #310 Smoked Mackerel. A delicious fish it was, no wonder Grigson wanted to get us all eating it. It was very much like eating smoked sashimi, which is certainly not a bad thing. It was much more firm and flavoursome than smoked salmon, which can often be weirdly gelatinous in its texture. The smoky flavour was excellent and bona fide; it smelled as though it had just been snatched from the smokehouse. I think cold-smoked mackerel might catch on these days; sushi is popular and people are much less likely to turn their noses up at raw (though perfectly-cured) fish. Hopefully it might get a second chance. 7/10.