A British classic. It is rather difficult to say how far back the rabbit pie goes – as far back as pies themselves go, I would imagine. The rabbit pie is the archetypal hunter’s family meal and is certainly a cheap – or free – way of getting some good protein in you. These days of course people tend to get their rabbits from the butcher, including myself, but rabbit is getting popular again now that people are trying to cut back on their spending. I wonder if more people have taken up owning an air rifle to hunt their own. The idea strangely appeals. It is worth considering: rabbits are a pest and do not have a hunting season. The reason they are a pest is because they are an introduced species, just like the pesky grey squirrel, only these little blighters came not from America, but from France. The French have kept rabbit farms for a long time and so after William the Bastard/Conqueror came over with his Norman pals to take the English Crown, the later Plantagenet kings brought their farms over. The rabbits escaped and bred like billy-o and we have been stuck with them since.

Still Life with Rabbits, a Game Bag and a Powder Horn
by Jean-Baptiste-Simeon Chardin, c1755

What is strange is that the French did (and still do) love farmed rabbit and prefer it over wild. Griggers – in all her rabbit recipes – specifies that it must be wild; “[d]omestic rabbit by contrast is as insipid as a battery chicken, even nasty in texture and taste.”

Rabbits were very popular in Northern England as a pie filling in the eighteenth and nineteenth centuries and an alternative meat for a steak and oyster pie – back in the day when oysters were poor people’s food.

If you see a wild rabbit in the butcher’s shop try one – it’s cheaper than a chicken and is truly free-range and organic to boot!

Rabbit – like all game – is very lean so it needs a little helping hand with some additional fat, in this case streaky bacon which also helps the meat go a bit further. Forcemeat balls are often added to dishes like this – something stodgy that again increases bulk. I’m a big fan of forcemeat balls, so I was glad to see them appear in this recipe. Last and by no means least is the herb thyme which is essential in any rabbit dish. Don’t scrimp on it. Because it is used quite liberally, use fresh thyme.

This rabbit pie is the last in a trio of game recipes I cooked whilst I was in England over Christmas. It serves 6 to 8 people.
First of all joint a wild rabbit (or ask your butcher to do it) and soak it in salty cold water for around 1 ½ hours. 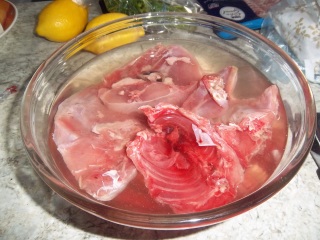 I am not quite sure why one needs to do this step. Perhaps it reduces the amount of water in the rabbit by osmosis for some reason? If you know, leave a comment, I’d be most grateful. Drain the rabbit and place it in a saucepan. Pour enough fresh water to cover the beast, bring the water to a boil and let it simmer for 3 or 4 minutes. Drain and dry it.

Roll the rabbit pieces in some seasoned flour and brown it in butter, lard, bacon fat or dripping in a large, deep sauté pan then fry a large chopped onion and 5 or 6 ounces of streaky bacon or salt pork. When lightly browned, add the grated rind of a lemon, a heaped tablespoon of parsley and four good sprigs of thyme.

Add enough light beef or veal stock to just cover. Cover and simmer until the rabbit is cooked. Jane doesn’t give a time here, but it will depend upon the age of the rabbit. Mine took about 1 ½ hours. To test it, I just sampled a bit of leg meat. Let the mixture cool and bone the rabbit if you want; I did because little ones were eating it.

Now the pie needs to be made. Place the mixture in a pie dish, piling it in the middle and scatter forcemeat balls around it (look here for the recipe). If you have a rather broad or long pie dish, it may be worth placing a pie funnel in the centre – I didn’t have one and the pie sank a little.

My niece and nephew, Emma and Harry, expertly decorate the pie

The best picture of the pie I could get –
it got gobbled up pretty fast!

#325 Rabbit Pie. I am on a roll with the pies at the moment because this was another excellent one. The rabbit was very tender and not too rank tasting as the previous rabbit had been. I suppose it is the risk one takes with game. The very lean rabbit was ‘fattened’ up excellently with all the streaky bacon it was fried with. Plus it was complemented perfectly by the fresh thyme and the lemon zest. Really good – now that wild rabbit is getting more common meat in Britain’s butcher shops, there’s no excuse in giving it a try. 8/10