Skip to content
My-oh-my! Where do I start with this one!? It is quite possible the most infamous recipe in the whole book. I must say it didn’t seem as daunting as it did when I first spotted it after I had decided to cook the whole book.
Lamb’s head was once rather popular – in particular during the nineteenth century. According to Grigson, Queen Victoria’s chef was a fan. Why has it that in the last few decades it has just simply disappeared from our food culture? It did hang on in Northern England and Scotland and it was one of Jane Grigson’s favourite meals and she emphasises that it is not “ungenteel…or even savage food”.

Mrs Beeton gives a recipe for leek soup that requires a sheep’s head and also describes how to “dress a sheep’s head” with a very similar recipe to Jane’s, though the barley is replaced with oats (as it is in the Scottish fashion). And if lamb’s head with brain sauce makes your stomach turn, I found a recipe in Elizabeth Raffald’s 1769 book The Experienced English Housekeeper for lamb’s head and purtenances, which, to you and I, are the innards. Calf’s head was also very popular; it was the main ingredient in mock turtle soup, for example. So the heads of sheep, calf and, of course, wild boar have been enjoyed for centuries in pretty well-to-do houses, so they can’t be that bad, can they..?

If you are thinking of cooking this receipt, first of all you need to find somewhere that’ll sell you a lamb’s head. I managed to get hold of one opportunistically at Global Foods in St Louis. There they were, just piled up in the freezer aisle. It is very important that you find an organic or halal butcher, then you can be sure that the animal was fed only what lambs should. The prion that causes scrapie is a concern with lamb that comes from the high-intensive farms, or at least it was. You also need to find some guests willing to eat it. Three brave souls – Anna, Vincent and Michelle – came to certainly the most unusual Sunday dinner I’ve ever had… 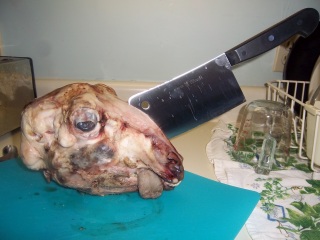 “Ask the butcher to clean and split the head…” starts Jane with this one. I wasn’t lucky enough to have a butcher on hand so I had to do this myself with a meat cleaver and a hammer. It took a fair few whacks and cracks before it split, but I got there in the end. I felt a little like Jack Nicholson in The Shining. Carefully remove the brain and keep it one side, whilst you soak the head in salted water for an hour before rinsing it and placing it in a pot.

Pour enough water to cover and bring to the boil slowly, skimming any grey scum that rises as you go. Now add the following: a bouquet garni that includes a good sprig of winter savory (which was the most difficult ingredient to find!); an onion studded with 3 cloves; 2 carrots and a parsnip, both peeled and halved, a small peeled turnip, a trimmed and cleaned leek, 8 ounces of pearl barley and a good seasoning of salt and pepper – at least a tablespoon of salt is required I would say. Let the broth tick away slowly on a bare simmer for 1 ½ hours.

Whilst the broth bubbles, prepare the brain ready for the sauce. Begin by carefully removing the loose membranous net of blood vessels and placing the brain in salted water for 30 minutes. Remove it from its brine onto a square of muslin and tie it up. Place the brain in with the head and let it poach for 10 minutes. The brain will now be cooked and become firm, unwrap it and chop the brain. 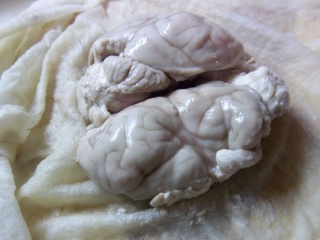 It is quite homogenous with no gristly bits, so don’t worry. Now make a simple béchamel sauce by melting an ounce of butter in a saucepan. When it bubbles, stir in an ounce of flour and cook for two minutes before gradually whisking in ¼ pint of milk. Thin the sauce to an appropriate consistency with some lamb stock from the pot and let it simmer for at least 10 minutes, adding more stock if it gets too thick. Stir in the chopped brain and some parsley if you wish. Season and add a squeeze of lemon juice. 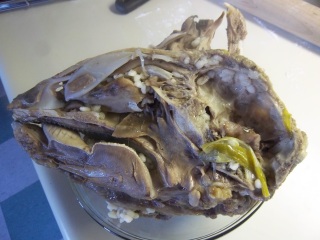 When the head is cooked, remove it from the pot and start having a good rummage around to find the meaty bits. I couldn’t find very much to be honest. There were two cheeks containing some good moist meat and the tongue of course. Apart from that, it was slim pickings. I thought perhaps there might be some edible palate as I knew ox palate was popular in the eighteenth century. The only other place I found some was at the base where head meets neck. Anyway, serve up what meat you can extract on a plate or bowl and surround with some of the barley along with some rolled grilled rashers of bacon and some lemon quarters and pour the sauce into a sauceboat. 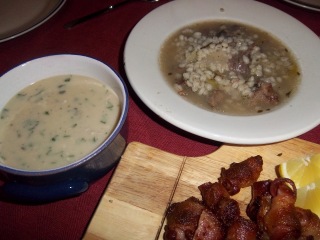 The stock makes “a marvellous soup”. If you want to be in the true peasant style, serve it as the starter. Jane recommends saving it for another meal; “[l]amb soup, then lamb’s head, is too much of a good thing.” I have five tubs of it in my freezer…

#333 Lamb’s Head and Barley, with Brain Sauce. Making this is in no way as macabre as you might expect, except for the part with the cleaver and hammer that is. There was very little meat, but what there was tasted delicious and was very tender and the barley broth was hearty. The brain sauce was also good – the brain itself was tender with a certain firmness that was quite appealing and had a very mild kidney or liver flavour. I think it could have done with a touch of Cayenne pepper. So overall, not bad at all, though the amount of meat was disappointing. The soup left over is delicious but needs a touch of sugar, as lamb and mutton broths often do… 6.5/10.