This recipe – the 350th – is the last I shall cook in America because tomorrow morning I fly back to England. It has been a great place to carry on the blog; there were many foods that were tricky to get hold of in Britain that were easy to find in the USA. The Americans’ love of freshwater fish and shellfish (particularly oysters) really helped me out in the Fish chapter and I managed to find lots of offal like pig’s heads, lamb’s heads, tongues and sweetbreads. The other great thing was that all my friends were so game to try the often strange things I served up to them, and I thank them very much for that.

This recipe would not seem strange to an American – a salad made from avocados and broad (fava) beans, but this would have been an extremely exotic dish in England during the 1970s where the avocado was very much the new kid on the block in the greengrocer’s shop. Of course, for that very reason, it makes this recipe a contemporary one – at least when the book was first published – perhaps Jane was doing her bit to introduce a new taste to the 1970’s English palette. It never became a classic recipe, but full marks to Griggers for effort.

I wanted to do this recipe before leaving St Louis because avocados are so delicious here and so flavourless in England. It’s a very simple one that marries together broad beans and avocados; two vegetables that I would never have thought about putting together. If only Hannibal Lector had known, he might not have been done for cannibalism:

“I ate his avocado with some fava beans and a nice Chianti.
Num um um-um-um”

This recipe comes from the ex-Guardian food writer Harold Wilshaw, whose name I always read as Harold Wilson when I flicked through the pages of the Vegetables chapter. He apparently he ‘thought up this particular salad when unexpected guests arrived and there wasn’t much in the house.’ How bourgeois of him to have an avocado just lying around in his house.

To make the salad start by podding some broad beans and boiling them for around 5 minutes. Drain and then begin the task of removing the thick seed coat. It’s not has fiddly as you might think; if you make a nick in one end of the bean, you can quite easily squeeze out the bright green bean from within.

Slice an avocado and arrange it on a plate along with the beans and drizzle over a simple vinaigrette made from either cream and lemon juice, or olive oil and vinegar. Season well and scatter over some extras if you like: chopped parsley, chives, spring onion or coriander leaves are suggestions as well as air-dried Cumbrian ham or Parma ham.

#350 Harold Wilshaw’s Broad Bean and Avocado Salad. Well I have to that this was an absolutely delicious and simple salad. Both vegetables are sweet in flavour, but have very different textures. I just hope I can get hold of avocados good enough to make it! 8.5/10 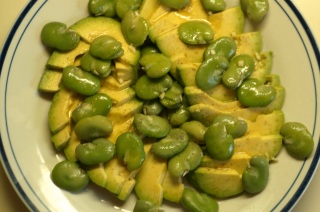