Skip to content
Rabbits are vermin and therefore, unlike most other game, have no ‘season’ and can be hunted all year round. This does not mean they are dirty animals of course; they simply breed like nobody’s business. The reason for this is that they are an introduced species, the Normans raised them on farms and inevitably there were escapees. Rabbit became the ultimate peasant meat and a stigma became attached. Rabbit and other game seem to be having a bit of a comeback. Bring it on, I say.
Farmed and young rabbits have pale, tender flesh and older wild rabbits have much darker flesh; almost black in some areas. Florence White, writing in her wonderful book Food in England gives us some sage advice on cooking and selecting wild rabbits: A young rabbit shot clean in the fields, is white like chicken and should be treated as such… Fat old country rabbits make good pies and stews. Thin, scavenger rabbits, trapped, broken-legged, and killed in fever and slow misery should not be eaten at all. They are definitely unhealthy food.
This is the last rabbit-based recipe in the book and probably my final one from the Gamesection until next season. It is an 18th century dish that comes from The Art of Cookery by Hannah Glasse, a lady that pops up a lot in English Food. 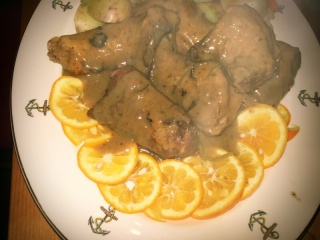 Hannah Glasse’s recipe serves four.
Joint one wild rabbit or ask your butcher to do it for you. Season some flour – around an ounce – with plenty of salt and pepper and liberally coat the rabbit pieces with it. Melt 2 ounces of butter in a pan and fry the rabbit pieces a golden brown colour – don’t overcrowd it, fry in a couple of batches if need be. Place the browned pieces in an ovenproof casserole dish. Deglaze the frying pan with ¼ pint of dry white wine and pour over the rabbit along with a pint of beef stock. Make a bouquet garni with suitable herbs and spices (I used bay leaves, rosemary, lots of thyme, parsley stalks, pared orange peel and a few whole black peppercorns) and pop that in too.
Put on the lid and bake in a low oven – 120-140⁰C (250-275⁰F) for at least 90 minutes. It is best to let the rabbit cool in the oven then reheat it the next day – this will produce nice tender rabbit – alternatively cook for another hour or two at that very low setting.
Fish out the meat and herbs and keep the rabbit warm somewhere. Strain the sauce through a sieve and bring to a simmer. Make a beurre manié by mashing two ounces of butter with a rounded tablespoon of flour. Whisk in pieces of it until the sauce is of desired consistency. I like a nice thick sauce so I used it all.  Add the juice of a Seville orange to the sauce and season with more salt and pepper if you think it needs it.
Slice two more Seville oranges thinly and nick out small triangles from the slices is a decorative manner. This is a very fiddly and boring job and I must admit I did give up after a couple of slices. Add the little nicked pieces of peel to the sauce.
Arrange the pieces of rabbit on a warmed serving dish with the orange slices arranged around it. Lastly, pour the sauce over the rabbit and serve it nice and hot.
#368 To Dress Rabbits in Casserole. This was a good dish – the rabbit was nice and tender and the sauce was light. The only problem was that there wasn’t much flavour from the Seville oranges in the sauce. I think that the juice of 2 oranges would have been better. Perhaps it was my fault for giving up nicking my little triangles from the orange slices. I would also lose the pointless decorative slices. 6/10.

One thought on “#368 To Dress Rabbits in Casserole”