Skip to content
The last of three recipes that use mackerel or herring roes.
There are two types of roe: hard and soft. The former comes from female fish and contains the egg, and the latter, sometimes called melts, are from the male fish and contain the sperm. This recipe, just like the other two, use soft roes. Eating the sperm sac of a fish might appear to be more of an ordeal than a pleasure, but they are tasty and can be picked up very cheaply at the fishmongers. Alternatively, when buying mackerel or herring, you can ask the fishmonger to keep behind any roes that might be present as he scales and guts them. At home, simply sequester them in a freezer bag until you have for a recipe. They are an acquired taste because they are very slightly bitter and so they lend themselves to creamy and buttery ingredients (for example see #159 Creamed Roe Loaves).

Jane makes a point for this recipe to try and buy nice neat matching pairs of roes, rather than just the cast offs that ‘have been flung on to a separate tray’. I would have thought that this recipe would be perfect for the roes that are so carelessly thrown onto the roe tray. Not that this happens anymore – because they are not so popular these days, you almost always have to buy frozen packs.

This recipe just shows how the British just loved to pot things: meat, fish, cheese. It can all be potted and preserved for a later date. In this case the roe paste will only last maybe 4 or 5 days in the fridge, but that’s a lot longer than raw roes would last.
To make your roe paste, first fry 7 ounces of soft herring or mackerel roes in an ounce of butter, then, Jane says, to pass them through a sieve. 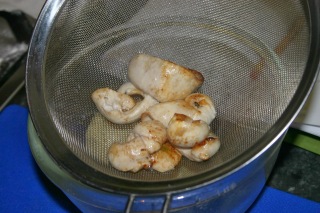 This was a tricky task, which was made much easier by the utilisation of my mouli-legumes. Beat the warm roes into 6 ounces of softened butter. Jane recommends using slightly salted butter, but I have to say, I prefer normal, salted, butter; after all you’ll only add more salt when it comes to seasoning later!

Next, mix in a tablespoon of double cream, then season with salt, Cayenne pepper and lemon juice. Finally add a little chopped parsley.

‘Serve chilled, but not chilled to hardness, with thin toast or baked sliced of bread.’
#391Soft Roe Paste. I liked this paste, the bitter flavour of the roes was cut with the lemon, cream and parsley whilst still maintaining the roe flavour. However, it didn’t exactly make me do backflips. Good, but not great, and nowhere near the dizzy height of previous fishy pastes like #378 Elizabeth David’s Potted Crab. 5.5/10.