Skip to content
Venison is the most widely-eaten game meat, outselling all other game put together. Venison is deer meat and six species live in the UK: red, fallow, roe, muntjac, sika and the fanged Chinese water deer. They all have different hunting seasons.
Deer are naturally very destructive animals, they can destroy whole forests during winter where they scrape away the bark of trees to get to their nutrients. Because of this, deer species must be managed within their habitat. In other words, they need to be culled. Things were okay when there were plenty of natural predators, of course, but we humans have stuck our oars into our countryside and woodlands far too many times, meaning that a cull would have to occur, even if we all went vegan tomorrow.

Of course, it wasn’t always the case. Back In Mediaeval England, Royal hunting preserves covered thirty percent of the country. Then, all beasts of Venery and all beasts of Chase, essentially belonged to the monarch and only he and some hand-picked members of the aristocracy were allowed to hunt them. These animals were culled selectively and were a precursor to our modern methods of habitat management.
FYI: Beasts of the Forest were split into three groups.
Beasts of Venery: hart (i.e. stags), hind (red deer), hare, boar and wolf
Beasts of Chase: buck, doe (fallow deer), fox, marten and roe
Beasts of warren: coney (rabbit), pheasant and partridge
Anyway, once you have your venison chops or steaks, of whatever species or sex, here is Jane’s advice for what to do with them:

Well-hung venison chops and steaks may be grilled in the same way as beef steaks. Serve them with the usual venison accompaniments, a port-wine sauce [such as #44 Cumberland Sauce or #394 Venison Sauce] or [#114] quince jelly, French beans and mushrooms or an orange and celery salad, and roast or fried potatoes or game chips [see#122 Roast Pheasant]…It is, however, a good idea to wrap them first in a piece of softened caul fat [see #373 Faggots and Peas], to act as a permanent basting. Season them with salt and plenty of black pepper first. Allow 15-20 minutes, turning them once, under a high heat. 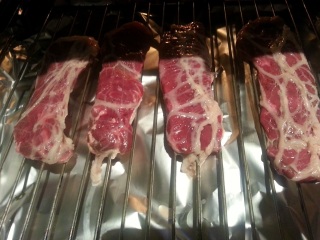 I think Jane is assuming here that your steaks are a good inch to an inch and a half thick. Mine were much thinner than that, so I grilled for a mere 5 or 6 minutes in total. Really high heat, nice and close to those grill flames, or, in my case, electric elements. Apart from that, I was a good boy and followed her instruction.

#396 Venison Chops and Steaks. These were great and tasted lovely with the sweet #394 Venison Sauce that I served them with. The thin steaks remained really moist inside their caul casing. By the way, if you can’t find caul fat, I would suggest searing them in a very hot pan in oil and butter and then basting them regularly on a lower heat or in the oven. Jane’s method is a good one ad so it can only score highly, seeing as I love venison: 8.5/10