Skip to content
I made this bread (the penultimate recipe in the Breadpart of the Teatime chapter) all the way back last autumn when plums were in season. It has taken me only four months to pull my finger out and tell you about it.
This is a recipe from a book called British Cooking by Theodora Fitzgibbon published all the way back in 1965. I just a quick search of her back catalogue and she has written a huge series of books on British and Irish cookery. (I ordered a load off that evil website that rhymes with Schlamzon, don’t judge me.)
Jane points out that raisins can replace plums out of season. Here’s what to do:
This is an old school recipe and so it starts with an ounce of fresh yeastcreamed in 3 tablespoons of warm milk. Leave it to do its stuff for 10 minutes and in the meantime mix together 8 ounces of strong white flour, 2 tablespoons of sugar and the grated zest of a lemon in a bowl. 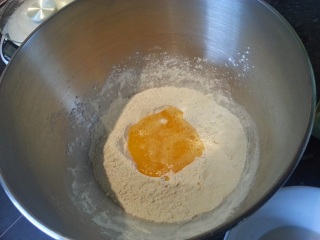 Make a well in the centre and plop in a large beaten egg, 2 ounces of melted, but tepid, butter and the yeast. Now mix to form the dough. What Jane does not mention is that this dough is so stiff it couldn’t possibly make a decent loaf of bread. Nevertheless, once the dough is (somehow) kneaded to make a smooth dough, place it in an oiled bowl with some clingfilm over it.
Next stone and chop enough plums to make 8 ounces and knead these into the bread. This was quite simply an impossible task, the dough was so stiff that the plums just squashed and made a pulpy mess. This required the food mixer.

“Mix in the plums, this makes the dough sticky”, says Jane. Well the Kitchen Aid made it into a big old sloppy mess, and I was not feeling hopeful.
Pour this mixture into a buttered and lined 9 inch loaf tin and leave it prove until the dough comes to the top of the tin. Bake for an hour at 190⁰C, remove and see if it sounds hollow, if not, pop it back in for another 15 minutes. 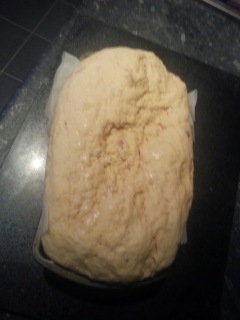 #401 Plum Bread. Of all the hundreds of bread recipes in England, why did Jane pick this one? It was so difficult to make and really was not worth the effort. Although the plums were delicious and sweet, the final bread had a strange sour taste. Its texture was very close and cakey. I am wondering if there was a typo or something somewhere in the recipe (I have spotted quite a few in other recipes). Disappointing and took up far too much of my time. 3/10. 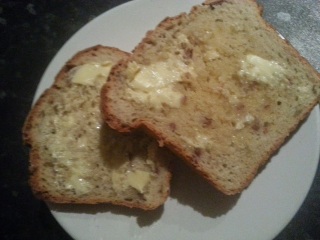