Here’s quite an involved recipe from the book that requires several techniques, one of which is the making of choux pastry – the one pastry I can’t seem to get right. However, I was asked to cater for a recent dinner party, and I thought this one could work very well because the theme was ‘An Alternative Christmas Dinner’. Prawn cocktail is often served as a starter at Christmas and I thought this hot shellfish starter would be a good alternative. It was more 1970s than prawn cocktail, sounding like a dish you would see crop up in Fanny Cradock book, not in a Jane Grigson tome!

It’s not for the faint-hearted though, aside from the pastry there’s a complex sauce made from the shells, so that means you need to shell your fish yourself to make this one. If you have never done this before, I recommend choosing prawns. Here goes:
First of all, make your choux pastry. Bring to a boil in a pan ¼ pint of hot water, a shy teaspoon of sugar and 2 ½ ounces of butter. Meanwhile, sieve 4 ounces of plain or strong white flour into a bowl; I went for the latter as you get better expansion, though this is not necessarily a good thing, see below.
When everything is boiling, take the pan off the heat, pop in all the flour in one go and make a dough by mixing the whole lot together using a wooden spoon. Put the pan back on the heat again and beat the dough well with your spoon. The dough will soon become waxy and will come away from the bowl. This can take a few minutes, especially if you’re out of practise when it comes to beating thick doughs, as I was. 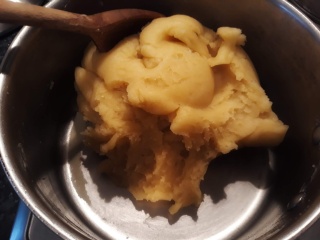 Let the mixture cool for 5 minutes and beat in 4 eggs one by one, waiting for the previous one to become fully incorporated before adding the next one. Use an electric stand mixer for this if you can, otherwise and electric hand whisk. The dough can be used straight away or covered and cooled and used later.

Prepare some baking trays by lining them with greaseproof paper. Now it’s time to pipe the pastry – Jane gives no indication as to how many we need or what size they should be. I scooped the paste into a piping bag fitted with a large round nozzle and made mounds around 1 inch in diameter. It’s important to raise the piping bag as you dispense the dough so your paste is very domed – you get a better and larger puff that way.
If your piped pastry has little spikes, press them down with a wet finger so they don’t burn and carefully drip on the tray (don’t sprinkle water on the pastry itself though). 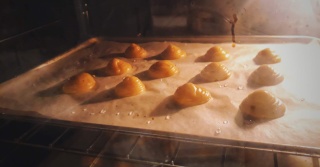 Jane now says to bake them for 35 minutes at 230°C which is far too long and too hot as I quickly discovered! I found they baked best at 200°C, becoming golden brown at the 20-minute mark.
Once they are good brown colour, remove them from the oven and cut a slit or make a hole in their bottom with a skewer. Tip them on their side, return them to the oven and turn the heat down to 120°C so that the steam that puffed them up can escape to create a nice crisp interior. Cool on a rack.

As always, whenever I make choux buns, they turned out all different sizes, all looking like clouds rather than perfectly domed profiteroles. However, they were hollow so good enough for me.

Choux buns can be stored in an airtight tub for a week, so you can get all of this done way before the time you want to serve the course.
For the filling, you need a pound of prawns in their shell, or a 1 ½ pound lobster, or a 1 ½ to 2 pound crab(or crabs). I went for prawns as I couldn’t get hold of crab or lobster at either of my favourite fishmongers! In retrospect it was a good thing, as prawns are much easier to shell than lobsters and crabs. My prawns were raw, so I steamed them in a saucepan containing just a few tablespoons of water. This method yielded a delicious, sweet tasting bright-pink liquid. I kept it and added it to the sauce later.

Remove the meat from whatever shellfish you are using and refrigerate it. If using large prawns, as I did, don’t forget to de-vein the blighters. If using crab or lobster don’t forget the precious brown meat and roe (if any).

Now make a sauce with the shells by adding them to around ¾ pint of thin béchamel sauce – Jane doesn’t tell us how to make one, but I heated ¾ pint of milk containing a couple of bay leaves, a blade of mace, some old ends of nutmegs and some crushed black peppercorns. I then made a roux with ½ ounce each of butter and plain flour.

Add the shells to the sauce and allow the sauce to simmer away for 15 minutes. Loads of flavour comes out of the shells, and the sauce turns a beautiful salmon pink colour. Sieve ‘energetically’, says Jane, so I strained the whole thing through a conical sieve, pushing down hard with the underside of a sturdy ladle. 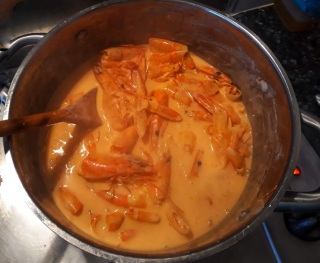 As the sauce simmers, fry 4 ounces of chopped mushrooms with a chopped clove of garlic in 3 ounces of butter.

Add to the sauce: the shellfish meat, the cooked mushrooms, 2 heaped tablespoons each of grated Lancashire cheese and double cream and two egg yolks. Heat the sauce, but don’t let it boil. Season to taste with saltand pepper.
Cut the choux buns in half crosswise and spoon some of the mixture into the bottom half. Deftly replace the lids and serve straight away.
#435 Shellfish Puffs. There were quite a few techniques required in this recipe, but I must say that it was absolutely delicious! The sauce was creamy, sweet and packed-full of umami flavours. Not too sure about the choux buns though, but the kitsch 1970s brief was definitely filled. Jane also suggests filling vol-au-vents with the mixture – I think this would work better than choux pastry, being more sturdy, but equally as old-fashioned. Nevertheless, that filling was great, whatever it was served in, so it gets a 8.5/10 from me.

One thought on “#435 Shellfish Puffs”