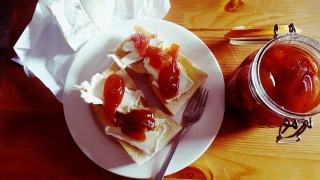 Here is recipe that uses up a glut of hard ‘windfall’ pears, should you have a tree, or know of one nearby. When I first read through this recipe – quite a few years ago now – I made a note to go to Chorlton Meadows, a lovely green area in Manchester that has a relatively unsullied Mersey River snaking through it. When I first started the blog, I had moved from Chorlton and had got to know it quite well, and I knew there was an area called Hardy’s Farm in the meadows, and part of the farm had been orchard full of apple and pear trees as well as gooseberry bushes.
Every year, in late summer, I made sure I visited the site of the farm and EVERY YEAR there were no tasty pears on the pear trees; they were either totally non-existent or shrivelled brown mush. To this day, I have never seen the pears there come to, as it were, fruition.
Not to be beaten, I made sure I planted a nice pear tree on my little allotment. The first year saw dozens of lovely white flowers, some of which I removed as I didn’t want to put the small tree under too much strain when it came to fruit production. It wasn’t too long before the flower petals were shed, and little pears started to grow. Eventually they reached a good size and had blushed with a delicious-looking pink colour, so I reckoned they would start falling soon. The next time I turned up to the allotment my beautiful pears had been STOLEN. I was livid.
After that the pear tree never flowered again.
These are the lengths I go to, dear readers, to follow the recipes as closely as possible; I didn’t want to simply buy some unripe pears from a shop. Anyway, I gave up and bought some.
I have no idea who Granny Milton is, but I assume she had an amazing pear tree in her garden. Well good for her. 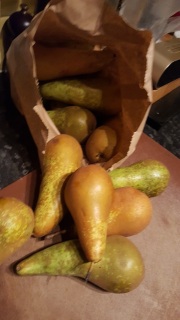 First of all prepare your pears – be they windfall or otherwise – by peeling, coring and quartering them. You need 6 pounds in all for Granny Milton’s recipe, but it can easily be adjusted if you have a different amount.

Next zest three lemonsand mix the zest with the juice of the lemons and weigh out 4 ½ pounds of granulated sugar.

Find a large bowl and layer up the pears, zest and juice, and sugar. Cover with cling film and leave overnight. 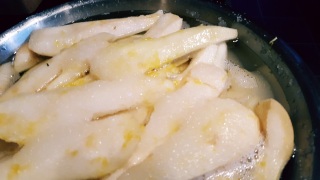 Next day, put the pears and extracted juices in a heavy pan along with a 4 1/2-inch stick of cinnamon and 8 cloves. Put on the lid and bake slowly in an oven preheated to 140°C for 6 hours.
When the time is up, take the pears out of the oven and allow to cool down completely before stirring in 6 tablespoons of brandy. Remove the whole spices and spoon the pears with the juices into sterilised jars and seal. I found that a lot of the sugar didn’t dissolve into the pear syrup, forming a half-inch thick layer of sugar that could peeled from the base of the pan! 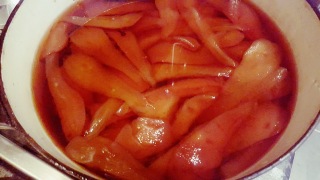 Leave the pears to mature in their jars in a dark cupboard or pantry for three months before eating them.
#430 Granny Milton’s Pears in Brandy. Jane doesn’t suggest what to serve these pears with. I have so far eaten them with sharp cheeses or Greek yoghurt. The pear flavour is very much preserved, and the spices really come through, giving good depth of flavour. They turned a beautiful deep translucent orange-brown colour. However, they were extremely sweet, so I’m quite glad that a lot of the sugar didn’t dissolve, I would suggest eating them with tart accompaniments. Not sure they were worth the wait! 5.5/10

No I’d never heard of one either. A junket is made by mixing milk with rennet and letting it curdle, adding whatever flavour you wish. Essentially, it is Little Miss Muffet’s curds and whey. These sorts of puddings were very popular – and still are in France. The English version being different in that the curds and whey aren’t separated, whereas other nations usually do. This is a very old recipe going way back – the earliest Griggers found was in a book from 1653. In fact the term ‘junket’ comes from the Norman French, jonquet, which was a basket made from rushes (jonques) to drain cheeses, says Jane. The junket has fallen out of favour, but is hanging on as a speciality of Devonshire, south-west England. The trickiest bit of the recipe, is finding somewhere that sells rennet – if there’s any Mancunians reading this, I got mine from Barbakan in Chorlton.

FYI: Rennet is an enzyme that used to be extracted from the stomachs of calves to curdle milk. Although still used, most manufacturers used vegetarian rennet to make their cheeses etc. I think the veggie-friendly rennet is produced using bacteria with the rennet gene inserted.

Warm a pint of Channel Island milk slowly until it reaches 37°C. If you can’t get Channel Island milk, use whole milk – do not be tempted to use skimmed or semi-skimmed, it will not work. Whilst it’s warming, mix a dessert spoon of sugar with 2 tablespoons of brandy in the serving dish that you want to set your junket. When at temperature, pour the milk into the dish and carefully stir in a dessertspoon of rennet (follow the instructions on the bottle in case this is different). Now leave the milk to set at room temperature. I went back and checked it after an hour and it was done – it had essentially become fromage fraise. Now slacken off ¼ pint of clotted cream with a little double cream and pour or spread it over the junket, being careful not to let it split. Lastly sprinkle some nutmeg or cinnamon over the top and you are done.

#131 Devonshire Junket – 5/10. This was ok, but sugar and cream always tastes good. I think the brandy should be replaced with some stewed fruit or vanilla extract, because I loved the texture of it. I think with a little playing around, the junket could have a come-back. I am dreaming up variants as I type…

The next most most exciting thing about Christmas dinner after the turkey, is probably the flaming Christmas Pudding. I had already made the puddings back in November, so now it was time to steam them for the big day. The pudding needs steaming for three hours, so you need to put it on in good time. However, that is the only thing you need to do, other than checking to see if the pan has boiled dry, so all is good. Turn the pudding out onto a serving dish and warm up some brandy either in a metal ladle or a small saucepan and light it (it won’t light unless you warm it first). Turn off the lights and pour it over the pudding. If this fails to impress the family, throw them out into the cold, cold winter street and tell them to come back when they’ve got some Christmas cheer. Serve with brandy butter, cream or custard.

To make brandy butter (or hard sauce, as it used to be called), cream 4 ounces of butter, when you’ve done that, beat in 4 ounces of icing sugar, 1 1/2 tablespoons of brandy, some freshly grated nutmeg and a squeeze of lemon juice, if you like. Allow to set in the fridge. Make this in advance – I made it a few days before the big day.

#88 Richard Boston’s Guinness Christmas Pudding – 3.5/10. Pretty disappointing this pudding was. It tasted really good, but was extremely stodgy and soft. I think I’ll use half breadcrumbs, half flour next time.