Eagle-eyed followers of the blog will notice that there has been no Apple Sauce I or II. In English Food there four recipes for apple sauce, so I thought it best to get the ball rolling. I’ve made this one first because it is not a sauce for pork, but for chicken. I had a very nice-looking free range chicken that I bought from the poulterer Peter D Willacy at Houghton Farmers Market, you see. He has no website, but you can call him in 01253 883470. The best thing about their chickens is that they come with giblets; not something you see these days, not even in good butchers. I’m hoping to buy a capon from them soon. This sauce can also be served with veal.

Anyways, if you are roasting a chicken this weekend, try this very easy creamy and usual hot apple sauce:

Core, dice and peel a pound of Cox’s pippin apples (or a good equivalent) and fry them in some clarified butter. (If you don’t clarify your butter first, it may burn. Melt it slowly in a pan, blot away any solids on the surface with some kitchen paper, then decant the liquid butter away, leaving behind any other solids that sank to the bottom.) When they have softened and turned a little golden, remove the apple pieces with a slotted spoon, leaving behind the buttery juices. Add six tablespoons of white wine (or cider) to the juices to deglaze and reduce it all well. Lastly, stir through six tablespoons of double cream and sharpen with a squeeze of lemon juice. Serve hot.

#199 Apple Sauce III. A strange one this one because the sauce is essentially stewed apples and cream, which in my book is a pudding. That said, it did go surprisingly well with the chicken as there are no strong flavours to drown out the subtle chicken. 5.5/10.

The fishmonger in the Arndale Centre in Manchester was selling sea bass for £1.50 each! What a bargain. I know that they’ve probably been dredged up by one of those massive trawler nets and by buying them I’ve surely helped seal the fate of several marine species, but ignorance is bliss so I won’t try to find out.

To go with the sea bass, I had samphire (see previous entry) and also made some hollandaise sauce. Not technically English, of course, but we’ve used it for so long in our cuisine it seems English – more English than, say mayonnaise anyway – and it is one of my favourite sauces. The trouble is, me and hollandaise has a chequered past; it’s a tricky sauce that is either amazing and delicious, or splits and is awful and goes in the bin. My success rate is around 50%. Griggers’ recipe is slightly different to the classic way of making it as it doesn’t use melted butter, but uses cubes of butter added gradually instead? Is this a foolproof recipe? We shall see…

FYI: hollandaise sauce first appeared as simply melted butter in eighteenth century France, but soon became the complex emulsion of butter and egg yolks we know and love and was added to the list of mother sauces of French cuisine by Escoffier in the early twentieth century (the others being béchamel, veloute, espangole and allemande).

This is the Griggers method (you can multiply up or down depending upon how much you need to make): 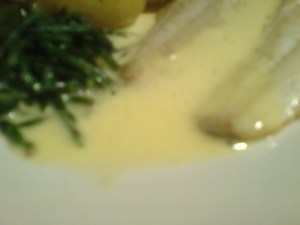 Begin by boiling down 3 tablespoons each of water and white wine vinegar and 10 crushed white peppercorns until just a tablespoon remains. Strain it into a bowl and allow to cool. Bring a pan of water to a simmer and place the bowl over it. Beat in three large egg yolks and beat in 6 ounces of unsalted butter bit by bit using a wire whisk. Do not over heat, or the eggs cook and the sauce splits. Season with salt and lemon juice.

#177 Hollandaise Sauce – 9/10. Well that was easy! This may be the fool-proof method I have been after (either that or it was a fluke). The sauce is beautifully rich, with a piquant tang of lemon and vinegar that cut through it so well that you easily drink a pit of the stuff. My only gripe is that this method doesn’t seem to make a very thick sauce, but that is being very nit-picky.

I invited Clive from work to help me finish off the last of the game I got from Bury Market last night in the form of (#44) English Game Pie. Looking through the ‘Stuffing, Sauces and Preserves’ chapter of English Food for something to go with game, I found (#44) Cumberland sauce. I’ve never had it before, and had no idea what it was. Everything was straight-forward, though the pie had lots of preparation. Anyways, here’s what I did…

The day before I simmered a brace of pheasants and a pigeon (essentially everything I had!) in a very light chicken stock along with a good seasoning and a bouquet garnei of parsley, bay leaves and thyme springs. Jane recommends between 2 and 4 birds. It took an hour and a half for the meat to become tender enough for me to pull the meat from the bone with relative ease. I cut the meat into chunks and kept them in a sealed tub topped up with the stock so it didn’t dry out over night and reserved the remaining stock.

Next day I arranged the meat in one large dish, and a smaller, as I made an extra one for my PhD supervisor too. Then hard-boiled and quartered three eggs and tucked them between the pieces of meat along with small rolls of grilled bacon (though not in yours Jason, don’t worry!), and chopped parsley. Next, I fried a large onion and about 8 ounces of mushrooms in 2 ounces of butter until they were golden. A tablespoon of flour was mixed in to the mushrooms and onions and stirred around so that the butter got absorbed, and then stock was added a ladelful at a time until a thick sauce had developed – about the thickness of double cream. Make sure the sauce is seasoned very well. It was simmered for about 5 minutes, and I added extra stock whenever the sauce thickened too much. The sauce was poured over the meat and then a puff pastry covered the pies. The large pie was cooked at 200 degrees for 20 minutes and then the oven was turned down to 170 for a final ten.

The Cumberland sauce was very easy. Make sure you make it in advance as it should be served cold. Whisk together a jar of redcurrant jelly and a teaspoon of Dijon mustard in a pan over a low heat. Meanwhile blanch the thinly pared peel of a lemon and an orange that have been cut into matchsticks for 5 minutes, then drain. Once the jelly has melted, add the peel, the juice of the two fruits, 5 tablespoons of port, plenty of black pepper and salt and ground ginger to taste (I used a scant teaspoon). Pour into sauce boat. Easy peasy.

FYI: Cumberland sauce is, in fact, German – the recipe was brought over with the House of Hanover in the late Eighteenth Century, and is named after George IV who was the Duke of Cumberland.

#43 English Game Pie – 10/10. This is my first full point dish I think! It was absoluely delicious. Although I’d never had it, there was something very familiar and comforting about it. It was

also, for me, the epitome of English Food. The meat was beautifully tender, and he sauce had turned into a delicious gravy and the salty bacon added an extra dimension. The full flavour of the pheasant and pigeon coped very well with the rich Cumberland sauce…

#44 Cumberland Sauce – 8/10. A perfect complement to the game. Although it was very rich and sweet, the savory additions such as the pepper and mustard allowed you to add loads. All in all a fantastic meal!