Skip to content
Well Shrove Tuesday is almost here, so I thought I’d provide a pancake recipe from English Food. This one is perhaps a more alternative recipe as it is most definitely savoury rather than sweet, and best served up with sausages, bacon and eggs as a breakfast dish rather than for a Pancake Day evening pig-out. In America, people seem to be having much more fun with their Mardi Gras celebrations…
The Welsh seem much more adept at pancakes than the English and I suppose that’s why there are so many Welsh recipes in the Pancakes and Griddle Cakes section of the Teatime chapter of the book. If they weren’t counted, there would be slim pickings. Crempog Las, by the way, translates as green pancakes in Welsh (check out this site for more information on this dish and other Welsh dishes). I didn’t have high hopes as there has been a bad run of recipes from this section…
The other reason why I wanted to cook these pancakes is that I found a pack of sausages that I bought from Harrison Hog Farms. They have a stall at the Rice University Farmers’ Market and breed pigs that look suspiciously like Gloucester Old Spots; a fine old English breed, so I thought they can’t be bad. Naturally, I put in them in the freezer and promptly forgot about them. Even though I have only been in my Texan apartment for five months, I have managed to almost fill my freezer with bits that I see in shops and left overs like wine, egg whites, breadcrumbs and what-not that I expect one day will come in useful. I decided that it needs emptying. It is for the same reason that later on this week I will be doing oxtail soup.
Anyways, I have wittered on far too much:
Using a whisk, mix together four ounces of plain flour, a large egg, a dessertspoon of finely chopped parsley, a heaped teaspoon of finely chopped shallot and enough milk to make a thick batter. Season with salt and pepper. Fry the pancakes in some oil or grease  over a moderately-high heat until golden brown – two or three minutes a side should do it. That’s it. Serve with butter or as part of a fried breakfast. 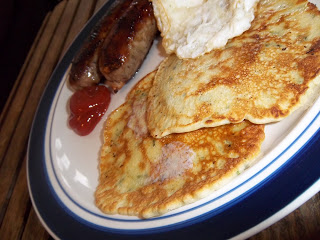 #278 Crempog Las. These were delicious! A subtle savouriness from the slightly sweet-acrid shallot and the grassy freshness of parsley made them very morish. I am definitely adding these to my breakfast arsenal. Give them a try, they are so very, very easy. 7.5/10.

I did Pancakes for the Rich a while ago, and so as it was Pancake Day or Shrove Tuesday yesterday. I thought I’d do the Grigson’s recipe for (#25) Harvest Pancakes for the Poor. [I don’t know why the pancakes were meant to be for harvest time, seeing as that’s in September…] Jane Grigson’s recipe is pretty much the same as everyone else, except she puts in ground ginger into hers; which was quite pointless since as you couldn’t taste it! Hey-ho. Anyways, many different fillings were made by me and Greg – some English, some not so English. No matter what fillings I try, nothing beats my two favorites: lemon and sugar, or butter and sugar. Yum!
For the pancakes, make a batter by whisking together 5 ounces of flour with half a pint of either milk or mild ale (!) and an egg plus half a teaspoon of ground ginger. Fry over a high-ish heat using lard or cooking oil to lightly grease the pan (pour off any excess and re-grease for each pancake).

FYI: Shrove Tuesday is the last day of Shrovetide which was a long festival that built up to the forty days of fasting in the lead up until Easter. I wonder if the 40 day fast thing is also a Pagan thing taken over by the early Roman Christians like Easter was? Anyone know??

Also I tried to make ice-cream to go with it, but my ice-cream maker is broken – what a crock of shit. I have had soooo much bad luck lately I’m beginning to think I’m cursed…

#25 Harvest Pancakes for the Poor – 8/10. A very good recipe, though I prefer using some water as well as milk, but that’s what I’m used to. Why-oh-why is there ginger in it?