Skip to content
Did you all have a lovely Christmas? I did – certainly when it came to the food. This one is just a quickie, the next post will be more exciting…
On the big day my family decided to go for a roast goose and #180 Roast Beef. Can you believe there is no recipe for roast goose in English Food? There is, however, a recipe for an apple sauce to go with it…
This apple recipe is the final one of four for apple sauce in English Food (for all four, click here), the others have been a little hit and miss; would it be the best? I had high hopes there’s robust spices, brown sugar and sharp Bramley apples and wine vinegar.
Aside from goose, this sauce goes well with salt pork and duck.
Start off by peeling, coring and roughly chopping a pound of Bramley apples. Melt an ounce of butter in a saucepan then add two tablespoons each of waterand white wine vinegar before tipping in the apples. Next add your spices; a quarter of a teaspoon each of grated nutmeg, cinnamon and black pepper. Simmer until the apples form a purée. Add more water if need be. Lastly, sweeten the sauce with about an ounce of soft dark brown sugar. Add more spices if you like (I found the amount suggested perfect). 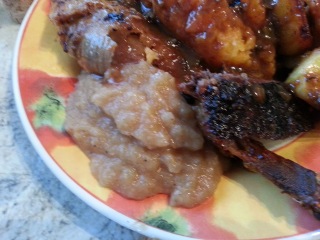 #364 Spiced Apple Sauce. This was, by far, the best of all the apple sauces. The sauce was a great mix of tart and sweet and there was such an interesting mix of spices that were warming yet totally savoury. The dash of vinegar enhanced the flavours and gave it a moreish tang that really complemented the rich goose. This will be the only recipe for apple sauce I will use from now on. 9.5/10.
Ah, the pickled egg, one of England’s most traditional and bizarre delicacies; and they are certainly not to everyone’s tastes. Usually to be found in the fish and chip shop or the pub, they are strange creatures; like little biological specimens bobbing about in their brown malt vinegar jars. I reckon that people automatically expect to dislike them, and they probably would do; however, this recipe in English Food seems very good. The main reason why a pub pickled egg is snubbed that they are pickled in pure malt vinegar which makes them far too harsh. This recipe uses white wine vinegar and quail’s eggs over hen’s eggs, which means they are tiny and bite-sized rather than a great big chore. You can use hen’s eggs for this recipe though as the spiced vinegar seems so much more subtle and sweet. In fact if you ever do get a load of hen’s eggs, this would be a good way to store them. They take two weeks to pickle, so I don’t actually know what they taste like yet; we shall have to wait and see (see here how they were).

First of all, you need to make your pickling vinegar and the amount you required will depend upon the number of eggs you want to pickle. I had dozen quail’s eggs and so only needed half a pint to fill one large jar. I’ll give you the amounts for two pints of pickling vinegar as provide by Griggers herself, you can alter amount as required. Pour two pints of white wine vinegar into a pan along with half an ounce each of fresh peeled ginger, mustard seeds and white peppercorns plus three small dried chillies. Bring to the boil and simmer for five minutes. Strain the vinegar and allow to cool. Meanwhile, place the eggs in another pan and cover with cold water. Bring to a boil and allow to simmer for two minutes for quail’s eggs and ten minutes for hen’s eggs. You would do well to time the simmering, you don’t want to guess the times and have over-cooked black-ringed yolks. Let the eggs cool also. Shell the eggs and arrange them tightly in a sterilised jar – if hen’s eggs arrange them upright; if quail’s don’t bother as they are far too fiddly. Pour over the spiced vinegar, tuck in the dried chillies and seal tightly. Make sure you use non-metal lids as the metal will be corroded by the acidic vinegar. Leave for two weeks before using in salads or as an hors d’oeuvre, says the Grigson. I might use them as an excuse to have fish and chips.

A dish with a Middle Eastern or North African influence, it seems like a very tame version of a lamb tagine with its spices, nuts and dried fruit, that has been very Anglicised. These days, we don’t need our food tempered down to suit our bland tastes; we like our foreign foods to taste traditional. However, as always new foods get invented, reinvented or modified dependent upon the country you are in and it is certainly no bad thing (think, chicken tikka masala and spaghetti Bolognese). This is a simple recipe that is excellent for a Sunday roast in the summertime – it required very little attention as you can make the stuffing, stuff the lamb and bung it in the oven whilst you go out for a nice walk or sit in the sun.

Also: I bought the lamb from Axon’s of Didsbury, South Manchester – it was of very good quality indeed, as was the pork ribs and sausages we bought too. If you are ever in the area, make sure you visit. They make their own sausages and also butcher veal – very rare these days. The man was very friendly and even gave us some extra pork ribs free. I think they may be my new favourite butcher.

To begin with, you need to make the stuffing. Boil 8 ounces of long grain rice in salted water until cooked. Drain it and put it in a bowl. Mix in 4 ounces of dried apricots ( you may need to soak them first), 2 tablespoons of seedless raisins, 2 tablespoons of slivered almonds, half a teaspoon each of ground coriander, cinnamon and ground ginger, plus plenty of salt and black pepper.

Now get the lamb ready – you will need a boned unrolled shoulder of lamb. Lay it out, season it, and then stuff it with some of the rice mixture. The best way to do this is to put the stuffing where the bones used to be. Grigson says to sew up the pocket where the bones were, but I found that I didn’t need to. Roll up the shoulder and secure it well with two or three pieces of twine. Weigh the lamb and place it in a roasting tin and brush it with melted butter. Season it well. Roast at 190°C for 30 minutes per pound plus an extra twenty minutes. When cooked, remove from the roasting tin and let it rest on a serving dish. Put the tin over the hob and add the remainder of the rice stuffing. Turn it around in the juices and let it reheat. Spoon it around the lamb and serve. We had it with a green salad dressed with a simple vinaigrette. 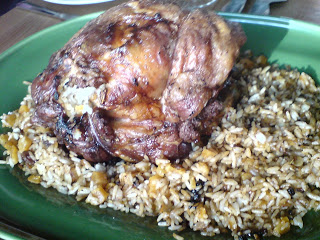 #175 Shoulder of Lamb with Rice and Apricot Stuffing – 9/10. Although I slightly mocked the dumbing down of flavour for the English palette, I found this recipe brilliant – it was simple, yet there were massive returns. The lamb fat was crispy on the outside and the meat beautifully tender within and the rice gave a sweet-sour flavour that cut through the rich lamb very well. It’s very difficult to knock this – especially when you have bought it from such a reputable butcher as Axon’s.

What makes these English, I do not know; other than a sort of nod to Maharajah days maybe. Anyways, I bought a huge bag of tiger prawns from W H Lung, the Oriental Cash and Carry near where I work for when I made Phat Thai for me and Butters at the weekend. I had loads left over, so I looked through the book and saw Spicy Prawns. I had all the ingredients in and it takes very little time to make. If you have spices at home, it’s a good one to do.

BTW: if you don’t, buy some spices in – they’re cheap as long as you don’t buy Schwartz spices; they are ridiculously overpriced. Go to an Asian supermarket. If you live in Manchester, Unicorn sells good value, organic spices. Also, buy your spices whole and grind them as you need them – the flavour is much better. Use a pestle and mortar, or as I do, a coffee grinder.

For two:
Peel (if you need to) and devein 8 ounces of raw tiger prawns. To devein, cut down the back of the prawn and remove the black vein running along its length. (FYI: it isn’t a vein, but the digestive tract and the black is the mud and God-knows-what else they’ve scoffed). Make a spice mix of ½ teaspoon of paprika, ½ a teaspoon of ground cumin, a ¼ teaspoon of ground ginger and a pinch of cayenne pepper, plus some salt. Heat a couple of tablespoons of olive oil in a pan and fry two chopped cloves of garlic. When they start to turn golden add the spice mix and fry for a minute. This is very important when cooking any spice – you need to fry them in oil at the start, otherwise they taste bland and raw. Add the prawns and fry for another two minutes, stirring them around so they get evenly cooked. Lastly, throw in a good few tablespoons of coriander leaves and cook for one more minute. Serve immediately.

Grigson says to serve with crusty bread or with saffron rice garnished with toasted pine kernels and fried onion slices. I went for the latter as you can see. To make saffron rice, you need to sprinkle in ¼ teaspoon of saffron strands to the rice when it is cooking. Use Basmati rice, fry it in oil for a minute before adding boiling water and some salt. The ratio by volume of rice:water is 1:2. Add the water, stir once, cover, and leave it on the lowest possible flame until all the water has been absorbed. Let it stand for a few minutes and fluff up with a fork. Perfect rice, every time! 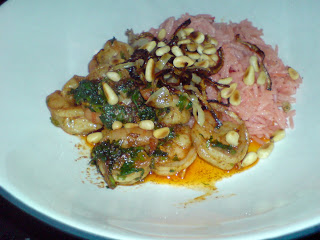 FYI: I usually don’t eat prawns, but have fallen off the wagon recently. If you eat alot of them, try and cut down. Those that are fished are trawled up with huge trawlers that kill everything in their path. For every tonne of prawns fished, ten tonnes of sea life dies. If you buy farmed, it is not much better; most farms are built on mangrove swamps – a habitat we are already losing at a rate of knots. When I’m done cooking the Grigson recipes with prawns, I’m going only have prawns at special treats.

#91 Spicy Prawns – 7/10. Very tasty and quick to do. Brilliant if you can’t be bothered cooking but want something proper. The prawns were ready in the time it took to cook the rice. The oily spices were just right – very intense, but didn’t mask the subtle flavour of the prawns. The saffron rice helped this thing along with it’s slightly musky-sweet flavour. Of course, this is even easier if you just have it with bread. Great stuff!