Well that’s the Vegetables chapter all done-and-dusted, so it’s time for one of my little round-ups; looking again at the recipes and history…
We regard vegetables as the backbone of a varied and healthy diet, but this wasn’t always the case, if you look back to between the late 11th Century and early Tudor times, vegetables were looked upon with suspicion, believed to really mess up your humours especially if eaten raw. The poor were welcome to them of course so they could pad out their pathetic rations of meat and cereals. This led to many peasants, who usually tended their own patch of land, to be generally healthier than the higher echelons of society, who tended to suffer all sorts of diseases and discomfort, such as constipation and scurvy. 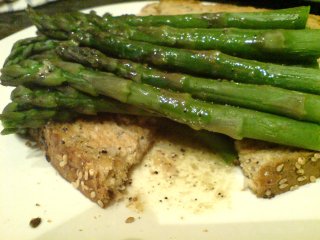 However, by the mid-16th Century, things had moved on and people became very interested in vegetables and their variety. Seed catalogues of the time listed around 120 different vegetables and herbs. A century later this was down to around sixty, and by the 1970s just forty. This correlates with the movement of people from the countryside to the cities to find work and the loss of self-sufficiency. In its place arose large-scale agriculture, where economy of scale won over variety. The invention of the supermarket succeeded in driving diversity down even further.

#426 Mushrooms in Snuffboxes
This chapter of the book was a whopper with 39 recipes in all, with many from the early days of the blog; in fact, I barely remember cooking some of them! Alot of ground was covered and there were some familiar and unfamiliar recipes and vegetables in there. I’m lucky to have to such excellent Manchester-based independent grocers, such as Unicorn, Organic North and Elliot’s that go the extra mile to supply an interesting array of vegetables and herbs to those that value diversity.
The best discovery for me was the seashore veg: laver, dulse, samphire and sea-kale. They really are worth trying, if you can get your hands on them. Dulse and samphire are pretty easy to get hold of, laver – in the form of laverbread – is easy as long as you live on the south coast of Wales, and you may have take to growing sea-kale on the fringes of your vegetable patch or allotment. I did manage to get some from Elliot’s, but they had to really root around the markets for me.

#412 Sea-kale
These indie businesses have a model that works, and with more and more people joining the vegan and Paleodiet movements, I suspect a real surge in interest into the quality and variety of veg is just around the corner – a brave new vegetable world? I hope so!
I had an allotment for a few years too, which helped, but had to give it up when The Buttery took off. I grew my own tiny broad beans so I could cook #398 Broad Beans in their Pods and sorrel for #164 Sorrel with Eggs.

#164 Sorrel with Eggs
Some recipes I had forgotten about until I looked back over the old posts really stood out: #196 Mange Tout Salad with Chicken Liver and Bacon, #288 Leek Pie and #76 Yeisen Nionod (Welsh Onion Cake) in particular are ones that I shall revisit.
Many of the recipes have become kitchen staples for me: both at home and professionally – #374 Pease Pudding, #295 Purée of Dried Peas with Green Peppercorns, #172 Cucumber Ragoût, #14 Leek and Onion Pudding and #5 Pan Haggerty are all served up regularly.

“Your old virginity is like one of our French withered pears: it looks ill, it eats dryly.” Bertram, As You Like It

What a great quote. Shakespeare was such a bitch.

This is an old, old recipe that Griggers herself has updated rather. In Medieval times a variety of pear called Wardens were used that were rock hard and required an hour’s cooking beforehand. These days, we use eating pears so it’s a lot quicker to make. It is best though to use unripe pears for this, though it doesn’t really matter what kind.

I chose to do this recipe as the dessert to a vegan meal I cooked with my good friends Danny and Eric. I was quite surprised that there was anything vegan in the book! In fact, of the remaining desserts this was the only one.

A some of you may know, one of my gripes is picky eaters. Vegetarianism and veganism don’t come under that term ofr me though. I think making a moral stance against eating animals or using the products of animals certainly has a lots of merit. Not eating honey is a bit stupid though. Anyway, what IS annoying is veggies who ARE picky. I mean, what is the point of restricting your diet if you don’t like most stuff anyway. Luckily noone fell into that category this night!

It’s an easy recipe that can be done well in advance.
Start by peeling, halving and coring the pears – you will need one per person according to Jane. Pop them in a pan in a single layer and pour over enough red wine to cover them. Add too, two tablespoons of sugar, a cinnamon stick and a good pinch of ground ginger. Cover them and bring to a simmer until they are nice and tender. This takes a good 25 minutes, but the time will depend on the variety and ripeness of the pears used. Remove the pears with a slotted spoon and keep warm whilst you boil down the wine until you get a nice slightly syrupy sauce. Add more sugar if you like. Pour over the pears and allow to cool. No need to serve anything else with them. 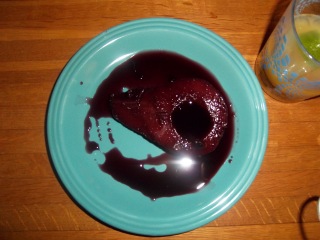 [If you don’t want to use wine, it can be adapted – swap the wine for water and the cinnamon for a split vanilla pod and add one sliced quince for every two pears cooked. Cook the fruit slowly to achieve a honey scented deep red sauce.]
#275 Pears in Syrup. This was a really good dessert. I’d actually put this one off because I expected to dislike it, but was totally wrong. The concentrated red wine sauce wasn’t heavy or sickly like I thought it would be, but light and refreshing. It must have been the pears and the spices that lightened the whole affair. That said, we could only manage half a pear each. The pudding looked quite impressive too with the dark, almost indigo sauce and the creamy-white pear flesh inside. Great stuff. 8/10.