I’m a chestnut fan, but I’ve not ever cooked with them, except for roasting. In fact I’ve only ever eaten them roasted or in a pork stuffing. I spotted some in the greengrocers and thought I’d have a go at this soup. The soups in English Food have been great (with the exception of the Mulligatawny Soup); and what I really like about them all so far is the simplicity – absolutely no faffing about. This one is no different. Give it a go if you see some chestnuts.

This makes enough for 6:

This soup requires a pound of chestnuts, and the first job is to pierce either end of each and every one with a sharp knife. Plunge them into boiling water for 10 minutes. Use a tea towel to grasp onto them with one hand and a sharp knife to remove their softened shells with the other and discard any bad ones; don’t worry if they are not whole. Keep them in the hot water as you peel them to keep the shells soft. Simmer the chestnuts along with one stick of celery in 3 ½ pints of light beef stock for 20 minutes. In the mean time, peel, core and slice two Cox’s Pippin apples. Simmer the apples in 2 ounces of butter until they soften, seasoning well with black pepper. Add the apple and juices to the stock and liquidise the whole thing until smooth. Return it to the pan, check for seasoning, and stir through 4 fluid ounces of single cream. Don’t let the soup boil if you are retuning it to the heat. Serve the soup with croutons fried in butter. 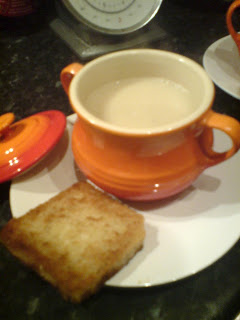 FYI: if you are lucky enough to know where there is a sweet chestnut tree, you can make shampoo from cooking up the leaves and peel.

#107 Chestnut and Apple Soup – 6.5/10. A very nice creamy-pale soup. Rich, yet light at the same time. I would certainly recommend this one; it would make a very good first course. Two apples didn’t really make it taste that much of apples, so it loses some marks for that – I would do three.

One thought on “#107 Chestnut and Apple Soup”