When I made the chestnut soup the other day, I made sure that there was enough spare to make this dish. I had bought a brace of partridge from the Farmers’ Market a couple of months ago waiting for some chestnuts to turn up. I had never eaten partridge before, but I know it is a highly-prized game bird. This is a very easy dish to cook – a very good introduction to game, if you haven’t cooked it before.

Here’s what to do with a brace of the little birdies:

Brown the partridge and 6 ounces of chopped streaky bacon in 1 ½ ounces of butter. When done, transfer the to a casserole dish and brown18 pickling onions, or 9 shallots, and add them to the dish too. Next, take a glass of dry white wine and deglaze the pan with it, making sure all the nice stuck-down bits come away from the pan’s base and pour over the birds. Add a little beef stock so that the liquids comes around half-way up the partridges. Cover and cook in a moderate oven – around 150ºC. Grigson now says to take out the birds when ‘almost done’. I had no idea when this would be and thought it would be slightly less than the pigeon I once did, but I was wrong. Take them out after around 45 minutes (I cooked them for 2 ½ hours!) and remove the birds. Add some Savoy cabbage that has been blanched for 10 minutes and lay it out in the dish. Return the birds. Now add 6 ounces of chestnuts that have been pricked, boiled for 15 minutes and then peeled. Cook for a further 45 minutes, or less if the meat comes easily away from the bones. I realised that they were already done at this point and didn’t leave the chestnuts in long enough. According to Larousse Gastromonique partridge shouldn’t take any more than 1 ½ hours to cook.

Finally, arrange the chestnuts, cabbage and onions or shallots on a dish with the birds on top and allow them to rest. Meanwhile, reduce the liquor from the dish by boiling it down hard to concentrate the flavours. This final step is very important. Serve with boiled potatoes. 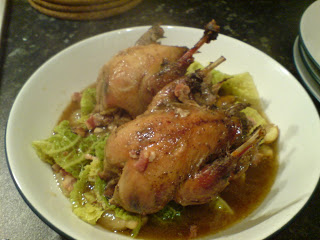 #108 Partridge with Chestnuts and Cabbage – 7.5/10. A very delicious meal – everything went so very well together and the partridge was pale with a nice gamy flavour that was not overpowering at all. The dish should be a 9 really I think, as the birds were overdone and a little dry and the chestnuts not cooked enough, but hey-ho that’s my fault, not Grigson’s.

One thought on “#108 Partridge with Chestnuts and Cabbage”