As we are being constantly reminded of Global Recessions and Credit Crunches in the news, I thought it’s best to get as thrifty as possible and make some meals out of leftovers. I’ve managed to get two extra things out of the feast I made – one of which is a recipe from English Food, the other one of my own devising.

I made the Kickshaws from the leftover puff pastry trimmings. They are very easy to make – good one to make with kids if you’ve got any and don’t mind getting their filthy little paws in you food. 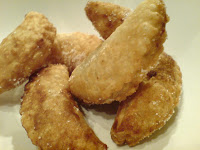 Roll out your puff pastry trimmings thinly and cut out circles of around 3 inches in diameter. Next, place a scant teaspoon of jelly or jam in the centre and use milk or beaten egg to make little parcels or turnovers; I used bramble jelly, quince jelly and apricot jam. Deep fry at around 160°C for a few minutes until the pastry has puffed up and golden brown. Sprinkle some sugar over them and eat warm. I poured some double cream over them that was also left over from big feast.

FYI: the name “Kickshaws” comes from an Anglicisation of the French quelque chose. I don’t know any French, but Griggers says it means “some odd thing or other”.

#126 Kickshaws – 8/10. Kickshaws go right back to Medieval times, though survived until the Eighteenth Century, though we don’t really make them now. We should definitely bring them back though as they are delicious. They are definitely being made every time there are trimmings to be used up!