The poultry section of English Food has not been tackled much; I don’t know why, because I’m a big fan of poultry. Anyways, walked through the Arndale Market in Manchester City Centre, I spotted that the butcher had some Guinea fowl – not something you really see these days out of specialist poulterers, so I thought I should snap one up as I had the opportunity (I also bought some corn-fed chickens so that I can address the lack of poultry recipes tackled later).

Guinea fowl is very popular in France, but are not so in Britain these days, though they were once considered very nutritional and perfect food for invalids, so why for a nation of sickly pasty folk, we don’t eat them by the bucketful I don’t know. In Burkina Faso, braised Guinea fowl are given to women that have just given birth. So there you go; prolong your life with a Guinea fowl dinner.

This recipe serves 3 to 4 people: Start by browning a Guinea fowl all over in butter and then placing it in a reasonably tight-fitting casserole dish breast down and dot it with two further ounces of butter. Now finely chop a medium-sized onion and sprinkle it around the sides of the bird and season. Cover tightly with lid or foil and bake for 30 minutes at 190⁰C. Meanwhile, slice 12 ounces of mushrooms and season them with salt, pepper and lemon juice (why Griggers says to do this now, I do not know), and when the 30 minutes is up, turn the fowl breast-side up and tuck the mushrooms in down the sides. Replace the lid and bake for another 40 minutes, taking the lid off for the final ten, so that the Guinea fowl can brown. Allow everything to rest for 20 minutes, then remove the bird and cut into eight pieces: two thighs, two drumsticks and four pieces of breast. Dish them up with the mushrooms and pour over the remaining buttery gravy. Serve with potatoes or bread. 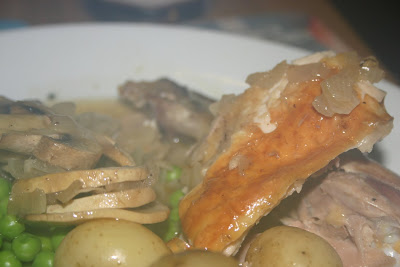 My lens steamed up, sorry!

#222 Guinea Fowl Braised with Mushrooms. This was the first time I’d eaten it, and it did not disappoint. The flesh tasted like a very rich chicken and was a little gamey; so something between a chicken and pheasant (in fact, Griggers says that all Guinea fowl and pheasant recipes are interchangeable). Briasing it in butter made the meat extremely moist and succulent, the slightly earthy mushrooms offsetting it all very well. Great stuff – and easy 8/10.