Skip to content
As our Jane quite rightly points out in English Food, many old recipe books suggest serving meat, fish and vegetables with good butter or good melted butter. This is not just high quality butter melted on the food, but a butter sauce not unlike hollandaise. The main difference being that flour is used to thicken the sauce instead of egg yolks, which makes the sauce much easier to make. In The Experienced English Housekeeper by Elizabeth Raffald, there are quite a few mentions of it, but no actual receipt. The recipe given here is from The Cook’s Guide by a certain Charles Elmé Francatelli who was briefly the chef at Buckingham Palace during the reign of Queen Victoria. Oh la-dee-da! (He left because he was disgusted with the filthiness of the kitchens.)
Anyways, the sauce seemed to be the perfect accompaniment to the poor old lobster I accidentally dismembered, then boiled. I’ll give the basic recipe and then the variations…
To make the sauce it is best to do the whole thing in a bain-marie or double boiler – i.e. a bowl over simmering water.  Weigh out 9 ounces of unsalted or lightly salted butter – Griggers suggests using a good Danish butter – melt one third of it in the ban-marie with some pepper and nutmeg. Next, stir in an ounce of flour and ¼ pint of cold water, using a whisk to prevent lumpiness. Heat until the sauce is at simmering point, then turn the heat right down and leave for 20 minutes for the sauce to thicken. Now beat in the rest of the butter piece by piece using the whisk. Add any flavorings you want at this point (see below for some suggestions). Season with lemon juice and salt, plus more pepper if required. Lastly, add a tablespoon of double cream for richness.
Flavorings:
Shrimp sauce – add some brown shrimp to the sauce at the end; use fish stock instead of water if you like
Lobster and crab sauces – add the chopped flesh plus some Cayenne pepper. If the lobster was a lady lobster with roe, then pass it through a sieve into the sauce.
Anchovy sauce – add some anchovy essence.
Herb sauce – add plenty of chopped herbs to the sauce near the end of cooking. For larger herbs like sorrel and spinach, steam and chop them before adding them to the sauce.
For the sauce I made, I didn’t want to chop the lobster up, so I stirred in the brown meat (which people think is inedible because of its consistency, but it is delicious) and some chopped parsley and provided it in a jug to be poured over the lobster halves. 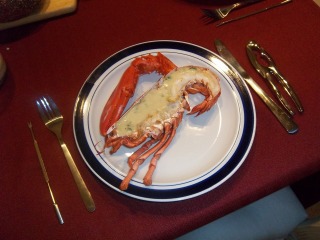 Check out the fancy lobster tools!
#272 Melted Butter. I really like this surprisingly light sauce and it complimented the lobster brilliantly. Plus it was much easier than a sauce hollandaise – one didn’t have to stand next it hoping it wouldn’t split. I imagine it would be good to serve with fish, potatoes and asparagus for a Sunday lunch in the summertime. A definite winner this one.