Skip to content
Many years ago when I began this blog, I winced in fear at prospect of eating brains but after scoffing sweetbreads, wood cock intestines, lamb’s head and jellied eel mousse, the prospect has become an exciting one. The only reason it’s taken me such a long time to cook the brain recipes in this book that you have to order a huge box of them – it’s how butchers buy them from their suppliers and they’re not going to be able to sell the rest of them after you have bought the one or two you need for your recipe. Of course, these days I do my pop up restaurants and so thought it’s about time they appeared on the menu. When it comes to recipe-testing, I always look to Jane first, so I cooked the two brain recipes in quite quick succession.
If you want to try and cook calves’ brains yourself, find a good butcher and ask for a box of brains. You’ll probably receive ten in all, but give him plenty of notice as it could take a couple of weeks for him to get his hands on them.
Before I go on with the recipe, a few words on the preparation of brains:

First, you need to get them ready for the pot by removing any pieces of bone and then gently peeling away the thin membranous network of blood vessels that surround the brain. To do this, you need to soak the brains in salted water for a few hours in the fridge, preferably overnight. This toughens up the membrane so that it peels without breaking so easily. This is a little fiddly to do, but you soon get the knack. You might find it easier to do it under a running tap. Large calves’ brains are difficult to hold in one hand, so cut them in half. Better have two, neat hemispheres than a dropped, destroyed whole. With a little perseverance, you should end up with a nice, milky-white very delicate brain ready for the next stage.

The prepped brains can now be very gently poached in milk for five minutes so they get nice firm (if going by Jane’s exact words, but a good court-bouillon is a good other option), then cut up appropriately.
For this recipe you’ll need 1 ½ pounds of calves’ brains (about two) that have been poached in milk and cut in slices about 1/3” thick.

Swiftly fry them in some butter over a quite high heat so that the brain browns nicely, whilst they remain nice and soft inside. Keep them warm in the oven as you make the sauce by first melting a good 3 or 4 ounces of butter. Soon it will start to sizzle and froth, but then it will go silent. This is the point at which all of the water has boiled away and the butter solids will soon start to change colour. Timing is critical now; ready yourself with 1 ½ tablespoons of white wine vinegar and wait for the pale solids to turn to a deep golden brown. As soon as they do, take the pan off the heat and pour in the vinegar, swirling the pan as you go. Add a heaped tablespoon of capers and level tablespoon of parsley and season with salt and pepper. 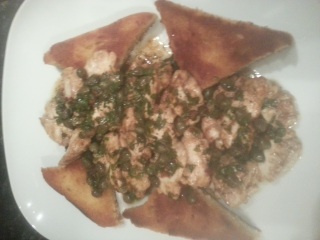 Jane suggests serving the sliced brains on a bed of cooked spinach with the sauce spooned over the top, surrounded by triangles of bread that have been fried in butter.

The photographs are not really doing the process justice. I really need a better camera!
#409 Calf’s Brains with Black Butter. Well I must say this was absolutely delicious! The soft and slightly-sweet brains were contrasted excellently against the fried bread, and the piquant sauce provided the dish with plenty of oomph, which bland brains need I think. I cooked an adapted version of this for a pop up restaurant by making it into a warm salad; every single plate came back clean. What a shame they have gone out of favour these days, perhaps now that the shadow of BSE no longer looms too darkly, they will begin to sneak back into our butchers’ shops again? Get your hands on some and have a go; fun to cook with, and a true gastronomic experience! 9/10 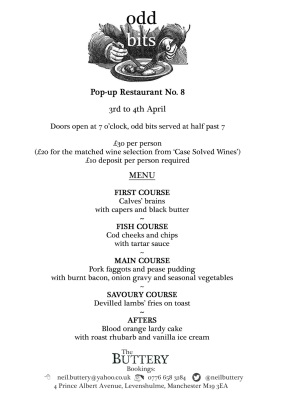 As our Jane quite rightly points out in English Food, many old recipe books suggest serving meat, fish and vegetables with good butter or good melted butter. This is not just high quality butter melted on the food, but a butter sauce not unlike hollandaise. The main difference being that flour is used to thicken the sauce instead of egg yolks, which makes the sauce much easier to make. In The Experienced English Housekeeper by Elizabeth Raffald, there are quite a few mentions of it, but no actual receipt. The recipe given here is from The Cook’s Guide by a certain Charles Elmé Francatelli who was briefly the chef at Buckingham Palace during the reign of Queen Victoria. Oh la-dee-da! (He left because he was disgusted with the filthiness of the kitchens.)
Anyways, the sauce seemed to be the perfect accompaniment to the poor old lobster I accidentally dismembered, then boiled. I’ll give the basic recipe and then the variations…
To make the sauce it is best to do the whole thing in a bain-marie or double boiler – i.e. a bowl over simmering water.  Weigh out 9 ounces of unsalted or lightly salted butter – Griggers suggests using a good Danish butter – melt one third of it in the ban-marie with some pepper and nutmeg. Next, stir in an ounce of flour and ¼ pint of cold water, using a whisk to prevent lumpiness. Heat until the sauce is at simmering point, then turn the heat right down and leave for 20 minutes for the sauce to thicken. Now beat in the rest of the butter piece by piece using the whisk. Add any flavorings you want at this point (see below for some suggestions). Season with lemon juice and salt, plus more pepper if required. Lastly, add a tablespoon of double cream for richness.
Flavorings:
Shrimp sauce – add some brown shrimp to the sauce at the end; use fish stock instead of water if you like
Lobster and crab sauces – add the chopped flesh plus some Cayenne pepper. If the lobster was a lady lobster with roe, then pass it through a sieve into the sauce.
Anchovy sauce – add some anchovy essence.
Herb sauce – add plenty of chopped herbs to the sauce near the end of cooking. For larger herbs like sorrel and spinach, steam and chop them before adding them to the sauce.
For the sauce I made, I didn’t want to chop the lobster up, so I stirred in the brown meat (which people think is inedible because of its consistency, but it is delicious) and some chopped parsley and provided it in a jug to be poured over the lobster halves.

Check out the fancy lobster tools!
#272 Melted Butter. I really like this surprisingly light sauce and it complimented the lobster brilliantly. Plus it was much easier than a sauce hollandaise – one didn’t have to stand next it hoping it wouldn’t split. I imagine it would be good to serve with fish, potatoes and asparagus for a Sunday lunch in the summertime. A definite winner this one.
I was very impressed when I discovered that The Fish Society sold freshwater eels that they had caught and killed themselves, before freezing them for my convenience. Regular readers will know the stress trauma faced the last time I cooked eels (in both delivery and preparation). The eel population in the UK and Ireland has dropped in recent years, but nowhere near as much as the elver population. I have blogged about this before, but it is becoming increasing clear, especially for Britain that it’s not a good idea to eat adult freshwater eel either now. However, it is not illegal to fish for them, so if taken in small numbers (and who eats eels these days!?) they should be okay. I don’t know what the situation is in the USA though. Are both eels and elvers available here..?

Anyway, enough of my rantings here is the recipe:

First, you need to prepare your eel; a two-pounder is required here. It needs to be skinned and then cut into three inch pieces. If it has been portioned already, but not skinned, you can either leave it on or fry the pieces skin-side-down in very hot oil for a few seconds. This makes the skin easy to peel off without cooking the eel itself. Next, coat the eel in seasoned flour and fry gently in 4 ounces of clarified butter until browned and the meat comes away from the bones easily. This took me about 7 minutes, but this will depend upon thickness. Next, prepare a lemon-butter sauce by melting 6 ounces of slightly salted butter in a saucepan and adding lemon juice to taste (I used a whole one). Put the eel onto a serving dish and keep warm. Now fry the parsley stalks. Start by heating up oil in a saucepan and fry around 12 parsley sprigs for a few seconds until crisp. Be careful here: the oil will splatter so just fry 3 or 4 at a time. Serve with some lemon-butter sauce poured over the eel, with extra in a jug, and the parsley sprinkled over it. 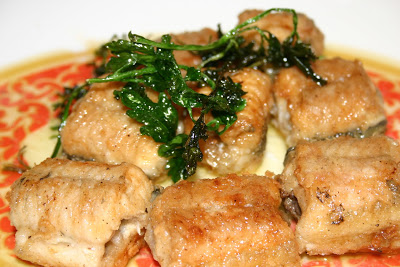 #251 Fried Eel with Fried Parsley. I have to admit, eel is a tasty fish and cooked this way really shows off it mild, yet delicious flavour. The fried parsley too was very good; like a grassy version of crispy seaweed you get from the Chinese take away! The only problem was the lemon butter – it just made the eel taste greasy. I think tastes have changed somewhat these days, and I think that a lemon mayonnaise would suit it better. However, still a pretty good recipe. 7.5/10.