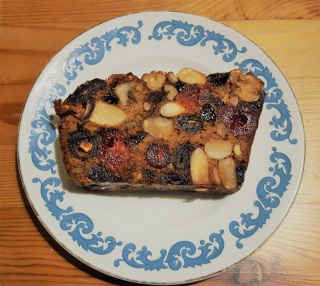 #431 Murrumbidgee Cake
The Cakes and Tarts section of the mammoth Teatimechapter is now complete. There have been some great recipes in this part of the book, many of which have become standards.
The Teatimechapter is so big that I had to split it, rather arbitrarily, into four parts; because of this there are some grey areas and some of the Breadrecipes should technically be part of this section. When we think of cakes, we tend think of light sponges made with flour containing a raising agent. These chemical aids to cookery, only appeared in late Georgian times, and only really caught on in the Victorian era; before then, cakes had to be raised with yeast. These days we would call these sorts of cakes ‘enriched breads’, so that’s why I have included them in the Breadsection. Likewise, there is a continuum between cake into tart with a cut-off point that was more difficult to separate and so for that reason, I kept them together.

There were very few disasters in the book, with the only bad recipes being the extremely dry and boring (#160) Rice Cake, and the super-sweet (#248) Mazarines; avoid those ones for sure. However, everything else was pretty good, I think I got better at baking cakes and pastry as I worked though the book, so some earlier efforts got unfairly marked down. Like all baking, it takes a little practise to improve. I also cooked many of these recipes very early on and barely remember cooking some of them!

#135 Butterscotch Cake
Inside this section are some simple classics as well as some great discoveries. The two tea loaves really are excellent, and it turns out the parsnip beats the carrot hands down in a cake. (#429) Cumberland Currant Cake and (#431) Murrumbidgee Cake (though the former is not a cake, but a tart) were excellent latter day discoveries, and Jane’s (#226) Eccles Cake filling is delicious, especially when used with her recipe for (#384) Fool-Proof Puff Pastry.
The biggest successes of all must be the Christmas recipes. Jane’s (#15) Christmas Cake is simply excellent, it is the only recipe to achieve full-marks and it is the one I use professionally. Likewise, the two mincemeatrecipes are part of my Yuletide repertoire, though I inexplicably scored them quite low. Must have had a bad day.

#429 Cumberland Currant Cake
This recipe had 35 recipes in all, and I think pretty comprehensive; usually I have list of glaring omissions, but this time I can’t really think of any. I suppose there are cakes that didn’t exist, or were not yet popular at the time of writing English Food, like lemon drizzle cake or American muffins. If you spot any glaring omissions, please let me know and leave a comment!