#431 Murrumbidgee Cake
The Cakes and Tarts section of the mammoth Teatimechapter is now complete. There have been some great recipes in this part of the book, many of which have become standards.
The Teatimechapter is so big that I had to split it, rather arbitrarily, into four parts; because of this there are some grey areas and some of the Breadrecipes should technically be part of this section. When we think of cakes, we tend think of light sponges made with flour containing a raising agent. These chemical aids to cookery, only appeared in late Georgian times, and only really caught on in the Victorian era; before then, cakes had to be raised with yeast. These days we would call these sorts of cakes ‘enriched breads’, so that’s why I have included them in the Breadsection. Likewise, there is a continuum between cake into tart with a cut-off point that was more difficult to separate and so for that reason, I kept them together.

There were very few disasters in the book, with the only bad recipes being the extremely dry and boring (#160) Rice Cake, and the super-sweet (#248) Mazarines; avoid those ones for sure. However, everything else was pretty good, I think I got better at baking cakes and pastry as I worked though the book, so some earlier efforts got unfairly marked down. Like all baking, it takes a little practise to improve. I also cooked many of these recipes very early on and barely remember cooking some of them! 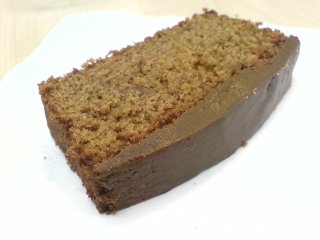 #135 Butterscotch Cake
Inside this section are some simple classics as well as some great discoveries. The two tea loaves really are excellent, and it turns out the parsnip beats the carrot hands down in a cake. (#429) Cumberland Currant Cake and (#431) Murrumbidgee Cake (though the former is not a cake, but a tart) were excellent latter day discoveries, and Jane’s (#226) Eccles Cake filling is delicious, especially when used with her recipe for (#384) Fool-Proof Puff Pastry.
The biggest successes of all must be the Christmas recipes. Jane’s (#15) Christmas Cake is simply excellent, it is the only recipe to achieve full-marks and it is the one I use professionally. Likewise, the two mincemeatrecipes are part of my Yuletide repertoire, though I inexplicably scored them quite low. Must have had a bad day. 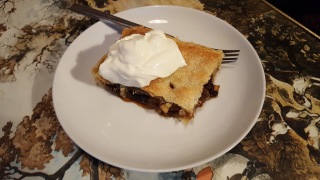 #429 Cumberland Currant Cake
This recipe had 35 recipes in all, and I think pretty comprehensive; usually I have list of glaring omissions, but this time I can’t really think of any. I suppose there are cakes that didn’t exist, or were not yet popular at the time of writing English Food, like lemon drizzle cake or American muffins. If you spot any glaring omissions, please let me know and leave a comment!

A good dessert to make if people are round because you can make it a couple of days in advance.

The tea in question for this tea cream recipe is green gunpowder tea. Green tea is a strange thing – I don’t ever drink it because it tastes of a combination of washing-up water and seaweed. Bleurgh. However, having it with cream and sugar did appeal slightly more; cream and sugar never taste bad, now do they!?

FYI: green tea comes from the same plant as our more familiar ‘black’ tea (e.g. PG Tips, Tetley, etc), but is unfermented thus retains its natural green colour, as opposed to black tea which turns its dark colour due to oxidisation during fermentation. Green tea is popular in China and Japan as we all know – but also in Muslim counties where it is forbidden to drink fermented tea. How bizarre. Anyone know why this is?

To make this tea cream mix together half a pint each of double and single cream in a jug. Pour around three-quarters of it into a small saucepan along with two tablespoons of sugar and an ounce of green gunpowder tea. Slowly bring to a boil, though keep on tasting it as you don’t want the tea to be ‘over-stewed’. Pour the hot cream into a bowl through a sieve. Taste again; if too strong add more cream. Use either a packet of powdered or five leaves of leaf gelatine to make the cream set. It’s best to follow the instructions on the packet at this point but generally you dissolve the powdered stuff in a little hot water and stir it into the cream, or soak leaf gelatine in cold water until soft and stir into the still-hot cream. Pour the whole lot into a mould – buy a fancy one if you can, I did. Cover with cling-film, allow to cool and then place in the fridge until needed. Turn it out onto a plate – you will need to dip the mould in hot water briefly to help loosen the jelly, I left it in too long and it went a little liquid around the edges. Serves five or six.

#201 Tea Cream. A funny one this one. I really liked the creaminess of the ‘jelly’, but the tea taste – though strong when hot, diminished greatly when chilled so I couldn’t really tell it was there. I certainly liked it enough to give it a second go at some point though. It did look very good in its fancy shape. 6/10.