Skip to content
Baking is the best form of procrastination because at least you have something to show for it other than a lack of what you should have been doing. I chose this bread simply because I had all the ingredients in. Although it is a rice-based bread, don’t be getting it confused with the awful rice cake I made last year. This recipe is another from Elizabeth David’s tome English Bread and Yeast Cookery, and was very popular with one Lady Llanover who said rice bread is the best for sandwiches. It has gone out of favour since the nineteenth century, let see if it worth bringing back…

First cook three ounces of long-grain rice in double its volume of water in a covered pan. Let it simmer and don’t take the lid off until all the water has been absorbed. Meanwhile, cream half an ounce of fresh yeast in a little water. The recipe calls for quite a lot of salt: between a half and three-quarters of an ounce of it! I measured a shy half an ounce. Dissolve the salt in a quarter pint of water from the kettle and add to it a further 8 fluid ounces of cold water. Place 18 ounces of strong plain flour in a mixing bowl, make a well in the centre and add the creamed yeast and warm salty water. Mix to form a soft dough with your hands, adding more water of flour if appropriate. Cover and leave to rise in a warm place: you know the drill. 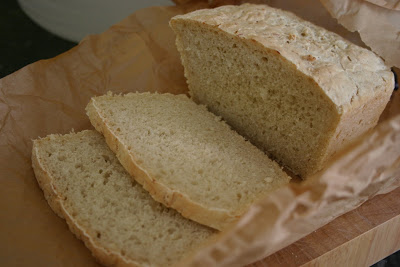 Knock back the risen dough and briefly knead, either by hand or with a dough hook, then place in a large greased bread tin that has a three to three-and-a-half pint capacity. Cover once more and allow to prove until it has risen up to the top of the tin. Place in an oven preheated to 230⁰C for 15 minutes and then lower the heat to 200⁰C for a further 15 minutes. Remove the loaf from the tin, invert it, and then place it back in the oven for a final five minutes so that the crust can crisp up.

#239 Rice Bread. A lovely pale, fluffy and slightly spongy bread that was indeed great for sandwiches. I polished most of it off with fried bacon and rocket with mayonnaise. Definitely the best of the plain breads so far, and definitely one of the easiest. I wouldn’t put more than a quarter of an ounce of salt in though as any more and it could have been horrid. 8/10